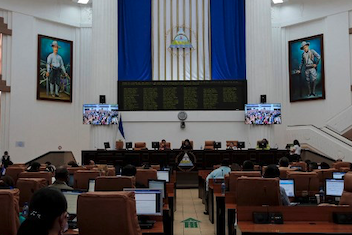 The Nicaraguan congress has cancelled the registration of another 100 NGOs operating in the country, some of which were dedicated to urban and municipal development.

The news of the cancellations was published in decree 8812 in the official gazette and comes in the wake of a raft of other NGO closures. The congress has now shut down nearly 700 NGOs since 2018 in what critics claim is an authoritarian attempt to eradicate civil society and silence critics of the government.

"This has not only affected human rights organizations, but also other national and international organizations working on education and development, as well as medical and professional associations," she added.

The decree states that the general direction of registration and control of nonprofit organizations, which is part of the ministry of the interior, should process the cancellations within a maximum of 72 hours.

Local media reported that the decree was approved on June 30, with 75 votes in favor, none against and 16 abstentions. The ministry of the interior stated that the organizations closed down have broken laws by not providing financial reports in the required manner, not updating information about their boards and not filing information about international financial support.

Private sector lending in Mexico was up almost 8% in the 12 months through May, while April figures show deposit growth at Nicaraguan banks slowing...

BIMA's recipe for success in selling insurance to underserved markets

Dialogue to end Nicaragua violence off to rocky start

Want to read more information about Nicaragua strips legal status from another 100 NGOs?