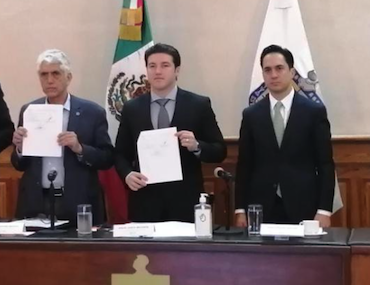 Mexico’s Nuevo León state announced the names of the 10 companies that will construct the 10bn-peso (US$500mn) El Cuchillo II aqueduct.

Governor Samuel García published a video in which he said the names were approved by a council formed by federal institutions like the national water commission (Conagua), the defense ministry (Sedena) and development bank Banobras, as well as local entities like water authority Agua y Drenaje de Monterrey.

“I would like to thank all the local companies who will carry out a project that had been forgotten for 26 years… this aqueduct will bring 5,000 more liters [per second] so that we don’t have another water crisis in Nuevo León,” he said.

The companies that will build the aqueduct are primarily Garza Ponce, which will be responsible for detailed engineering, producing the executive project, and installing the pumping station; and Maiz Mier, which will be in charge of the first stretch that will run from the auxiliary plant to the second tank. The rest are Arendal, Tordec, Recsa, Cosene, Dycusa, Hércules, Locsa, and Java.

“The local company that will supply the pumps is Ruhrpumpen, and the ones to provide the steel ducts are Villacero, Tubacero, and Tubac, all from Nuevo León. We have also requested that all materials are produced locally,” García added.

Construction is due to begin on Friday and, according to García, would have taken three or four years but will now be finished in eight to 10 months thanks to the “turbo speed” at which the companies will work.

A local official from the Mexican state tells BNamericas about the project’s details.