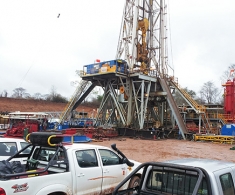 Bolivia plans to press ahead and issue exploration permits for oil and natural gas companies in protected natural areas in a bid to increase the country's hydrocarbon reserves, a government official said.

Companies may explore in Bolivia's fragile ecosystems if they comply with environmental legislation, Oscar Claros, head of contracts at state oil company YPFB, said at an energy conference in Lima, Peru.

Bolivia has created 60 protected natural areas and 22 national parks covering an area of 182,717km2, equivalent to 17% of the country's territory, according to environmental agency Sernap.

Private investment has dwindled in Bolivia since President Evo Morales, who was sworn in for a third consecutive term last year, seized oil and gas fields and refineries from companies including Repsol, BG, Petrobras and Pan American Energy after taking power in 2006.

Private oil and gas companies are investing US$700mn-800mn a year in Bolivia, compared with the US$2.111bn invested by YPFB in 2015, Claros said.

Bolivian natural gas exports to Brazil and Argentina averaged 48Mm3/d in 2015, according to a company presentation. YPFB, which invested US$11.183bn over the past decade, has boosted monthly output to 65,401m3 diesel, 77,144m3 gasoline and 294t LPG.

YPFB, which has brought online the US$191mn Río Grande and US$694mn Gran Chaco liquids separation plants since 2012, is on track to inaugurate its US$198mn LNG plant and US$877mn ammonia-urea facility this year, Claros said.

Bolivia produced 61.3Mm3/d of natural gas and 61,870 b/d of crude oil and gas liquids through the first half of 2015, the latest available figures from YPFB. The company aims to boost the country's natural gas output to 77.4Mm3/d by 2020.

Bolivia: YPFB inaugurates modern laboratories that will allow it to control the quality of hydrocarbons and calibra...

Bolivia plans to close 2022 with $us5.9 billion in income from consolidated sales of hydrocarbons

Does private renewable energy have a future in Bolivia?