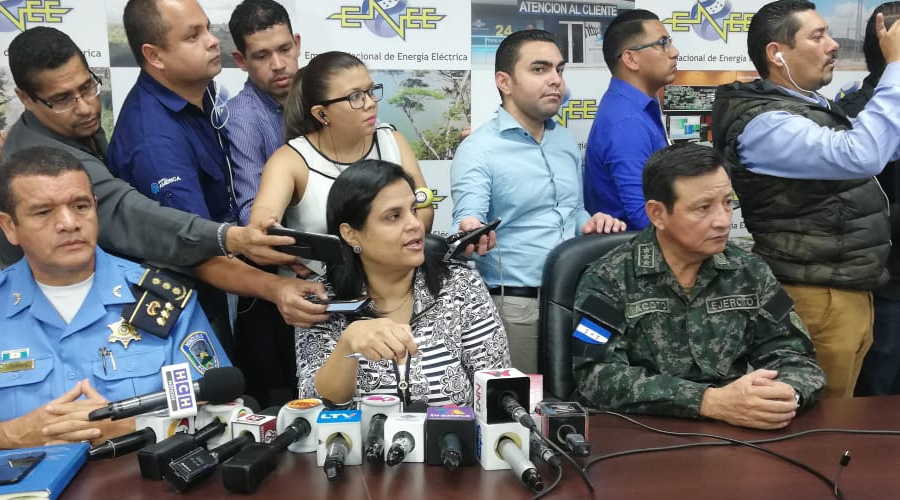 This Government of Honduras release was published using machine translation.

Tegucigalpa, January 15. More than 45 million lempiras were recovered by power outages in the first 48 hours of Operation Thunder headed by the Intervention Commission of the National Electric Power Company (ENEE) in conjunction with the National Anti-Evasion Force (FNA), reported Today the latter's coordinator, Angela Madrid.

The official presented to the media the progress and actions taken in the first 48 hours of Operation Thunder against energy theft.

He warned that "the message we are sending to the population is that, if you owe it, the energy service will be cut off, regardless of whether it is a residential, commercial or high consumer subscriber."

Among the actions carried out, he highlighted the identification of six duly documented cases of theft of energy, which will be sent to the Public Ministry so that the corresponding sanctions are applied by law. The cases are located in the industrial sector of Tegucigalpa, San Pedro Sula and Juticalpa.

Also, to demonstrate that Operation Thunder is giving results, Madrid said it had an increase of 50 percent in the amount recovered due to default between the first day of the operation, January 13, 2020, and January 14, 2019.

The FNA coordinator also presented the anomalies and incidents found in the first days of the operation, among which she highlighted commercial premises in high-value sectors that have a residential rate.

Likewise, manipulation of electrical installations to evade the real energy consumption, violation of the meter seals to circumvent the corresponding controls, customers that cage the meters to prevent the measurement, reading and billing of the service and the lack of purification of the base of EEH data, among others.

The official explained that among the actions that were carried out in these 48 hours stand out the withdrawal of connections to large consumers (industrial sector), the installation of telemetry equipment to remotely control the incidents and the collection of minutes as evidence before the Police Directorate of Investigations (DPI).

With respect to the delay that several institutions of the Government have with the state power company, the official informed that there is already an exchange of payment notices so that these entities make the pertinent budgetary movements for the cancellation of the service or that they also make payment agreements.

The FNA coordinator concluded by saying that the claim of the ENEE Intervening Commission is to recover twice the amount charged in the first two days of Operation Thunder during the rest of the week.

The strategic plan aims to improve reliability and facilitate the connection of non-conventional renewable energies.

Gabriel Perdomo: ENEE Interventor will continue working on the rescue of the electrical system

Gabriel Perdomo: ENEE Interventor will continue working on the rescue of the electrical system

Honduran distributor in the crossfire as losses spike

CABEI formalizes the definitive removal of the Agua Zarca project

Improve infrastructure, priority of the SCT in PEF 2021

By the end of the year there will be 59 roads of the Paving Program for Munic...

Ericsson accelerates 5G for Enterprise with acquisition of Cradlepoint

Want to read more information about Operation Thunder recovers more than 45 million lempiras for energy theft in the first 48 hours?