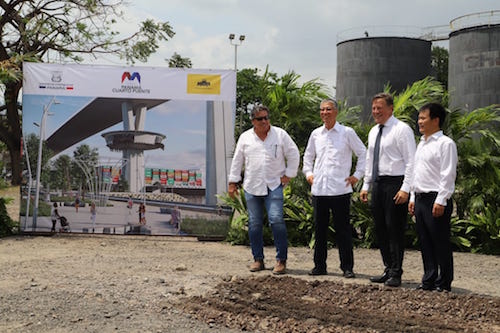 Panamanian President Juan Carlos Varela has laid the first stone of the fourth bridge that will be built over the Panama canal.

In a ceremony to launch works at the site, Varela said that his government had also made a down payment of US$67.9mn to Chinese consortium Panamá Cuarto Puente, comprised of state-owned firms China Communications Construction Company and China Harbour Engineering Company, which has been tasked with completing the project.

The president called on the group to hire significant numbers of local staff for the construction works, as well as to complete the project efficiently and on time.

The bridge will be built north of the Bridge of the Americas to help alleviate traffic congestion. It will be a continuation of the Corredor Norte highway to Panamá Oeste province, connecting with the Pan-American highway, which also crosses the canal, allowing users to travel from the Tocumen area to the region west of the canal without having to go through the city.

The cable-stayed toll bridge will have eight lanes, six for vehicles and two central ones for the future metro line No. 3. There will also be two emergency lanes.

Two interchanges will be built at each end of the canal.

Construction is expected to take 60 months and the bridge is designed to have a lifespan of 100 years.

The PPP authority approved the contract and tender criteria for the project to rehabilitate and upgrade 246km of the East Pan-American highway.