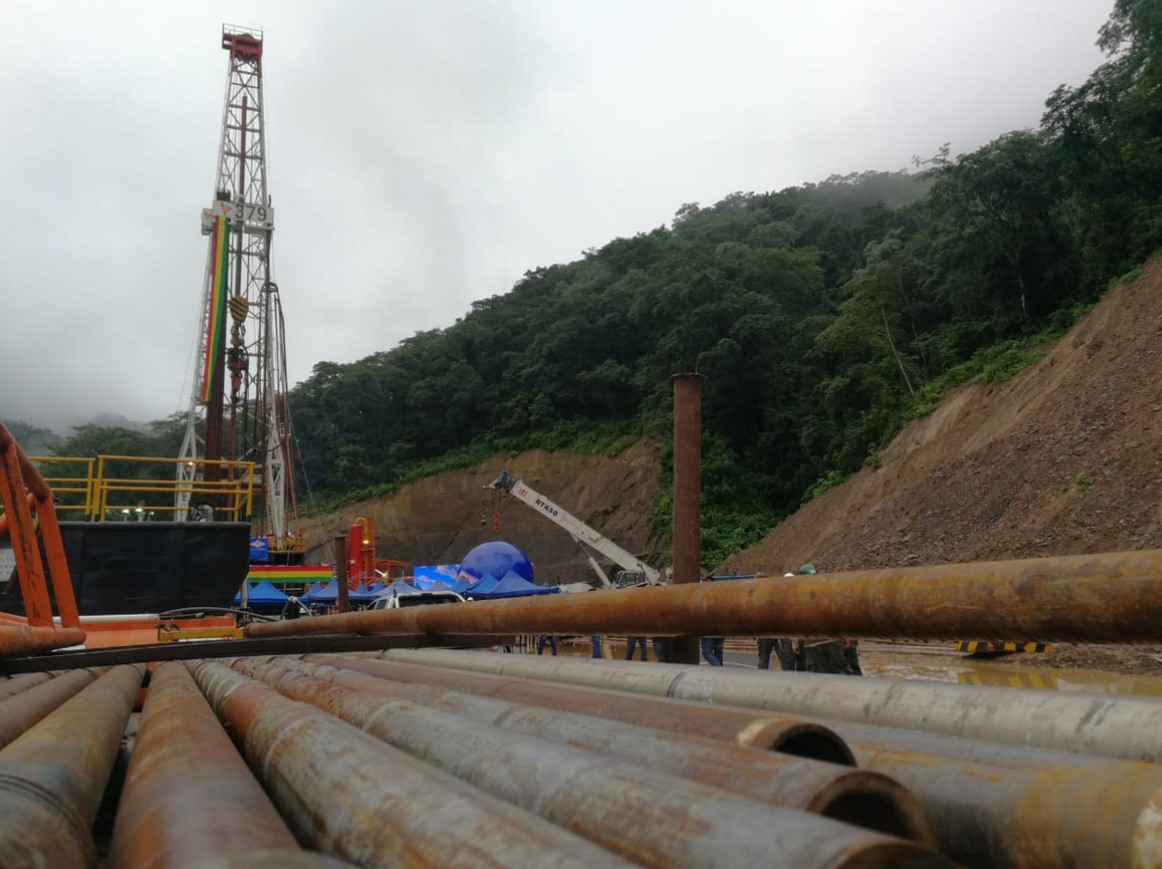 On Monday, President Evo Morales Ayma, the Minister of Hydrocarbons, Luis Alberto Sánchez, the President of YPFB, Óscar Barriga, among other authorities, inspected the well Caigua 15 D, located in the municipality of Villamontes. "The Caigua 15 D well will produce 10 Million Cubic Feet (MMpcd), already producing as 50 MMcfd In April, 60 MMcfd will be produced in this region, to continue improving production (...), which is also for the market internal and external, "President Morales reported.

The president highlighted "the efforts made by the ministry's work team (of Hydrocarbons) opening new markets", where the production of more volumes of gas contributes to compliance with the markets. In this line, he mentioned the gas pipeline project to Paraguay (Asunción).

For his part, Minister Sánchez said that with this well "we have discovered two producing sands Icla and Santa Rosa, those two sands have already been tested and the production volumes have been determined". With Caigua 15D, there are 6 wells in the field of the same name, and the production will be processed in La Vertiente Plant, which will increase national production ".

The minister said that "this afternoon the drilling of the project ends, in which $ 21.7 million will be invested, and we will have oil income of about $ US475 million. * The next few weeks we will be reporting that Bolivia continues to increase reserves, production, in order to redistribute income among all Bolivians. "

Sanchez said the well was discovered by YPFB Chaco, a 100% Bolivian company, whose production will be commercialized not only in the domestic and foreign markets; but that "it will serve for the projects of industrialization". He stressed that 80% of the tankers in the well are workers who belong to the area.

The authority said that 2019 is "the year of exploration, today we have the most important reserves in history, 10.7 trillion cubic feet (TCF), we have inherited from other governments with 9 TCF, but we have replenished and increased reserves" . He emphasized that in 2019 26 wells will be drilled in 23 new areas of the country. "$ 1.4 billion of investment will be invested and 14 companies will work hard to explore, find reserves and increase production."

He said that the oil rent of the department of Tarija of the last 13 years was $ us5,000 million, "but the gas producing region, the Gran Chaco province, only has 20% of gas network coverage. we will be inaugurating with President Morales new residential gas installations in the Chaco ".

"This year is important for us, we will continue working with effort and commitment so that we have greater income from the sale of gas, not only sell gas, we sell recon (reconstituted crude), white gasoline, liquefied petroleum gas (LPG), fertilizers and , soon, we will sell plastics, "said Sánchez.

This Ministry of Hydrocarbons release was published using an automatic translation system.

With an initial production of 10 Million cubic feet per day (MMmpd), the Caigua 15-D (CAI-15D) well, directed drilling, begins to its productive stage, carried out to the north of the Caigua field, Serranía del Aguaragüe. The well was inspected on Monday, March 18 by the State President, Evo Morales, together with the Minister of Hydrocarbons, Luis Alberto Sánchez and the president of YPFB, Óscar Barriga. With the CAI-15D it is expected that the production of the entire field will increase to 60MMmpd until April.

The top executive of the state oil company said that this result is a clear proof of the efficiency of exploration tasks developed by Yacimientos Petrolíferos Fiscales Bolivianos through its subsidiary YPFB Chaco.

"For the entire project, a maximum production of 50 MMcfd is estimated, which represents approximately 22% of YPFB Chaco's total gas production, which will contribute to supply the domestic market and fulfill the commitments assumed by YPFB," he said. the executive of the state oil company.

YPFB Chaco, as part of the development of Campo Caigua in the mountainous area of Aguaragüe, executes the drilling project for the advanced well Caigua - 15 Directed (CAI-15D), the directed drilling has the purpose of developing the hydrocarbon potential of the Icla reservoirs and Santa Rosa of the Devonian system, in the North sector of the field located in the Gran Chaco province of the department of Tarija, 16 kilometers from Villa Montes.

YPFB Chaco, in the perspective of increasing production, and incorporating new gas and condensate reserves, programmed the drilling of the Caigua - 15D development well (CAI - 15D), constituting this project as the last well in the development of the Caigua field.

This YPFB release was published using an automatic translation system.

Minister Molina: Bolivia has no problems sending gas to Brazil, we seek to improve the price

Want to read more information about President Morales announces that Caigua 15D well will increase production in April to 60 MMpcd?