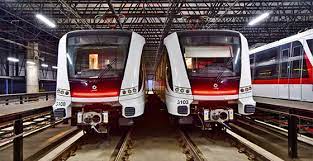 Metro de Santiago plans to start construction of lines N°8 and N°9 involving over US$3.68bn in 2025 and finish them by 2030, which would add 36km to the Chilean capital’s subway network.

The two projects are currently in the studies phase and are expected to obtain environmental approval by late 2024.

Meanwhile work on a US$197mn extension of line N°6, which is under environmental evaluation, is expected to start next year, according to Metro de Santiago’s corporate engineering manager Rodrigo Terrazas.

The extension will be carried out with state rail firm EFE, as it will link the metro system with the future Santiago-Melipilla interurban service.

Terrazas said during a webinar held by technological development corporation CDT that the 26km line N°7 will be built using a tunnel boring machine (TBM), unlike previous lines that were developed using sequential excavation, also known as the New Austrian tunneling method (NATM).

When BNamericas asked Terrazas about the impact of using TBM on line 7’s cost, he said the price per excavated meter using the method was 30% higher than with NATM.

However, since the tunneling machine is faster, and involves less surface interventions than sequential excavations, it compensates for the extra cost, he added.

For lines 8 and 9, the NATM method is expected to be used because of the type of soil in southern Santiago that would make operating a tunneling machine more difficult, though Terrazas did not rule out using TBM on specific sections.

Basic engineering studies for line 8 are currently out to tender, while those for line 9 were awarded to a consortium consisting of local firms CyD Ingeniería and Zañartu, which also won the detailed engineering contract for the line 6 extension.

Multiple gigawatt-scale projects geared chiefly to the export market and powered by wind turbines are planned for barren Magallanes region, where a...

The Marga-Marga hospital project is 40% complete, according to local officials.