Snapshot: Where Chile's AFPs are investing

Chile’s private pension fund system is recovering following a turbulent start to the year that saw assets under management (AUM) battered by financial market turmoil whipped up by the coronavirus pandemic.

AUM stood at US$197bn at the end of May, reflecting a partial recovery.

At the end of January, the companies were managing US$215bn, according to data from pension watchdog SP.

AUM hit a 2020 nadir of US$171bn at the end of April as higher-risk assets took a battering.

Amid the market turbulence, the number of pension savers switching between risk-based funds within the same AFP has rocketed.

In April, the country's seven AFPs registered a total of 833,491 movements, the second highest tally on record after the 897,292 registered in March. In April, 95% corresponded to movements within the same AFP, Ciedess, the social security research unit of Chilean construction chamber CChC, said in a report.

Against the backdrop, as part of efforts to support returns and portfolio diversification, the government has proposed giving the central bank scope to raise to 20% the upper limit on the proportion of AUM that the AFPs can invest in alternative assets. Under the existing legal framework, the central bank decides how much of each risk-based fund AFPs can invest in alternative assets. Currently, this can range from 5-15%.

Also, over the period quarters of the opposition tried to start a process of nationalizing system assets. Plus, a court said a retired teacher could withdraw her pension savings, a move that could be challenged by respondent AFP Cuprum in the higher courts. 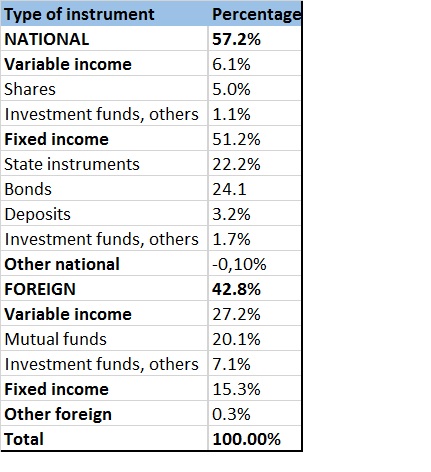 Where Chile's AFPs invest saver funds, through May 2020. BNamericas with SP data.

At the end of the session, the Minister of Finance valued the good reception of the parliamentarians regarding the modifications.

Want to read more information about Snapshot: Where Chile's AFPs are investing?