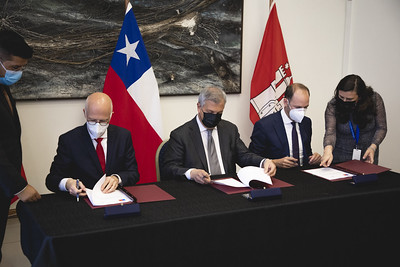 Chile is eyeing both Europe and Asia as target markets for future production of green hydrogen and its derivatives. Chile has already signed similar agreements with Rotterdam port in Holland and Antwerp port in Belgium.

Chile’s production will initially serve the domestic market, the energy ministry said in a statement, with a second phase involving ramping up installed capacity to build an export industry.

The country's goal is to install 25GW of electrolysis capacity by 2030 and become a low-cost green hydrogen heavyweight.

A pilot e-fuels plant, Haru Oni, is under construction. The country has a portfolio of projects of different sizes, including one with 10GW of electrolysis capacity, the first phase of which is due to enter service in 2026.

Acciona is the power supply partner in the project, being led by LNG player GNL Quintero.

Chile has a green hydrogen strategy in place and an associated roadmap is expected to be ready by early 2023.

Parties now have until 17 November to present their full projects, the industry, energy and mining ministry said in a statement.

The government has established a US$10mn project funding pot, which would be delivered as a grant and disbursed over 10 years.

Projects must involve electrolyzers of over 1.5MW in capacity and be in operation before 2025, with priority given to those with the earliest commissioning dates.

The process is being led by national research and innovation agency ANII, national technology laboratory Latu and the industry, energy and mining ministry.

Elsewhere on the green hydrogen promotion map, authorities have previously said bidding processes would be launched for onshore and offshore green hydrogen production projects, designed to woo private investment. Uruguay is eyeing both the domestic and export markets.

In related news, government officials recently met with the Hamburg delegation. Uruguayan industry, energy and mining minister Omar Paganini said the country was heavily focused on exports to Europe and that the goal was that, by 2026-27, at least one medium-scale production facility is operational.

In compliance with the mandate contained in the Gas Services Law, the National Energy Commission (CNE) announced the results of the sixth profitabi...

Chile: Ministry of Finance promoted meetings on the challenges of green finance within the framework of COP27

Six panels with experts from the world of finance, banking, governance, clean energy and bond issuance, all with a sustainability focus, met to pre...

Chile: Government presents committee of experts for a regulatory improvement in the natural gas market