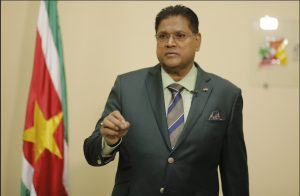 Office of the President release

The Staatsolie Maatschappij Suriname has indicated that there will be no offshore oil production in Suriname before 2027. This is based on a number of factors that have emerged from the current exploration phase. As a result of this fact, President Chandrikapersad Santokhi has decided to inform society as fully as possible. In the following statement, the head of state gives, among other things, the government's view on the newly obtained information.

President Santokhi says the government will continue with the projects it is carrying out. He mentions the construction of the deep-water port in Nickerie to create an economic hub and the recently launched first cooperation between Suriname and China in the field of agricultural technology. In this context, the government has already made an area of 200,000 hectares available for boosting the agricultural sector. In addition, EUR 10 million has been reserved for the agricultural sector and production.

The head of state notes that due to the postponement of the Final Investment Decision (FID), it was also expected that the first offshore oil production would be postponed. He says that starting this requires thorough preparation. Delays and postponements, according to President Santokhi, affect Suriname's economic, financial and energy sectors. The government will do everything it can to bring together the actors in the energy sector and to stimulate an integrated approach.

He further says that after the expectation was first 2025, Suriname can now better prepare for the major development with the postponement. For example, young people can be prepared for the oil sector and more investments can be made in local content. The head of state notes that by 2027 many Surinamese will have graduated in the field of oil and gas; the training courses for this have recently started.

The government will continue to focus on the manufacturing sector, in which, according to President Santokhi, more investments should be made. Suriname will also have to export more and thus generate more income. Attention will also be drawn to agriculture. The head of state says that there is no lost money in the exploration. He believes that investing involves risks and opportunities. This provides security and ultimately a bright future for Suriname.

Other companies in: Oil & Gas (Suriname)

Want to read more information about Suriname: Despite postponed oil production, the government continues on its chosen path?