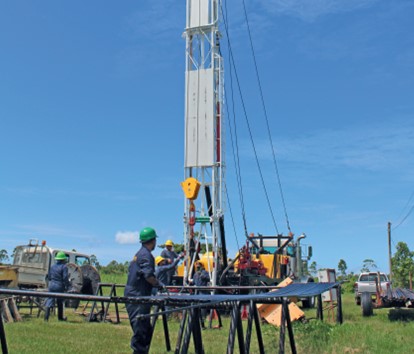 Suriname’s state oil company Staatsolie has reduced its drilling campaign for this year to 30 from 95 wells due to the international oil price fall.

In an update, the NOC said the majority of the 30 wells entail infill drilling in a bid to maintain output at 16,500b/d. The reduced program’s budget is US$20mn.

Although 117 wells had been planned, low water levels due to drought stymied access to drilling sites, according to the state operator which also produces crude from the Calcutta onshore field.

This year, Staatsolie also plans to implement polymer flooding on a large scale at Tambaredjo to keep production stable after using the enhanced oil recovery technology as a pilot project.

On the downstream front, Staatsolie said that a first major maintenance or turnaround of the 15,000b/d Tout Lui Faut refinery took place earlier this year.

The work will allow for the safe and reliable operation of the plant for four years, said the NOC. An expansion to double the refinery’s capacity was commissioned at the end of 2015.

Regarding another international bond issue, the company said there are no current plans due to market conditions

“We are preparing for the moment when a decision should be made to invest in participation in offshore oil production in block 58, together with Apache and Total,” Staatsolie financing and investor relations head Angela Profijt commented.

Santokhi replaces Dési Bouterse who had been in office since 2010. Previously, Bouterse was the head of the 1980-87 military government and has been convicted of human rights abuses and drug trafficking.

Santokhi may usher in a new era and temper ties which Bouterse fostered with Cuba and Venezuela, among other “friendly allies,” but he also inherits a crisis-stricken economy.

However, oilfield re-injection and pipeline opportunities will be more viable options to monetize gas in the short and medium term, according to UK...

The country's NOC looks to draw investors with partnering opportunities across onshore and offshore acreage.

Other projects in: Oil & Gas (Suriname)