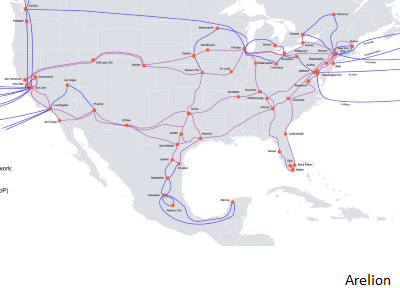 The networks will run from Laredo and McAllen, in Texas, to Monterrey, in Mexico, the company said in a statement without providing a go-live date.

A first route will connect with Arelion’s points-of-presence (PoPs) in McAllen, from MDC's MCA2 datacenter, to Monterrey, where it will link with Equinix's MO1 site.

The second will go from Laredo (from VTX's datacenter) to Monterrey (Neutral Networks' Pabellón M site).

PoPs are cabinet-like critical interconnection infrastructures, an interface and access point from one place to the rest of the network.

Arelion has worked since 2018 to build up its presence in Mexico where it owns and operates seven PoPs. Two in Querétaro serve Equinix’s and KIO Networks’ QRO sites, with another two in Mexico City serving KIO’s MEX2 and MEX5 datacenters.

The latest PoP was opened in Mérida, serving AiTelecom.

In a June interview with BNamericas, business and network development director Art Kazmierczak said two PoPs were planned for Guadalajara and a second one for Mérida.

“We see the Yucatan Peninsula somewhat traditionally underserved, so the investment fits well with our focus of trying to bring connectivity and scale into some of the underserved edge markets on a global basis,” said Kazmierczak.

Owned by Polhem Infra, a Swedish investment company backed by large pension funds in Sweden, Arelion claims to operate the largest internet backbone in the world. Known as AS1299 it stretches 70,000km across Europe, North America and Asia.

This US$150 million investment is the third and final phase of Gold Data's Mexico network expansion. It will complement the company's low-latency u...