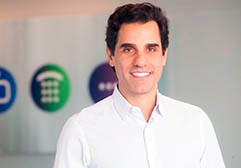 Telefônica Brasil is in advanced negotiations with a major international financial investor to build and offer a neutral and independent wholesale fiber network and plans to announce the partner later this quarter, according to CEO Christian Gebara (in photo).

The new company will be called FiBrasil, Gebara revealed in the company’s Q4 earnings call on Wednesday.

As previously reported, the new enterprise will include Telefónica group’s infrastructure unit Telefónica Infra in addition to the international investor.

The project is expected to reach around 5.5mn homes and businesses with fiber in four years.

The initiative will enable the Spanish-owned telco to accelerate the expansion of fiber throughout all regions of Brazil, focusing on cities outside the state of São Paulo.

FiBrasil will have 1.6mn of homes-passed – households where the company’s fiber reaches, although they are not necessarily clients – already deployed by Telefônica Brasil.

Combined with its own organic deployments, Telefônica Brasil intends to reach 24mn households by the end of 2024.

Telefónica's plan to create a neutral, wholesale fiber infrastructure company – which sells services to other providers and operators – is similar to those outlined by Oi and TIM Brasil.

But Telefônica Brasil looks to be the first to launch such a network. Gebara also said the company owns the largest fiber-to-the-home network in Brazil.

The trend of spinning off fiber is global.

In Latin America, Telefónica recently announced the sale of 60% of its fiber operation in Chile to global investment firm KKR, which could well turn out to be the partner chosen for Brazil.

That initiative will also serve as a wholesale infrastructure network open to all current and future telecom operators in Chile.

Telefónica has a 20% share of the fiber market in Brazil, according to regulator Anatel, six percentage points more than second place.

The company ended last year with its FTTH service present in 266 municipalities. Of these, 28 were covered through partnerships with infrastructure companies Phoenix Tower and American Tower.

Under that model, capex is split between Telefónica and the partner. The telco also deals with home connections and opex.

According to Gebara, the model is similar to what the company envisions for FiBrasil.

Telefônica Brasil also has a franchise model for fiber, under the Terra brand. The service is available in seven cities, and capex is all the responsibility of the franchisee while the telco receives royalties.

The franchise model targets small and mid-sized cities. Gebara says the company is planning to expand to more cities soon, gradually “opening up” the base.

The investments were focused on FTTH and IPTV adoption and footprint expansion, as well as increasing 4G and 4.5G capacity and network expansion.

In 2020, capex totaled 7.79bn reais, or 18.1% of net operating revenues, mainly focused on the expansion of the FTTH network and mobile service quality.

As for this year, Telefónica does not foresee additional expenditures related to the acquisition of Oi's mobile operation. All costs will be absorbed in the company's capex for the year, according to the CEO.

Unlike its competitors, the telco is not providing financial guidance for 2021.

"But the capex will be controlled. We had additional capex in the past for the acceleration of FTTH. Last year was unusual due to the pandemic, but we’re not going to go back to the level that we had when we needed to accelerate FTTH."

On spectrum disbursements, CFO David Melcón said the company will "leverage" to pay for licenses in Brazil's upcoming 5G tender, slated for June or July.

Telefônica Brasil ended 2020 expanding its leadership in the Brazilian mobile market, with a 33.6% share and 37.7% postpaid mobile share.

Will Lula agree to the privatization of Santos Port Authority?

Want to read more information about Telefónica’s Brazil fiber spin-off gets a name?