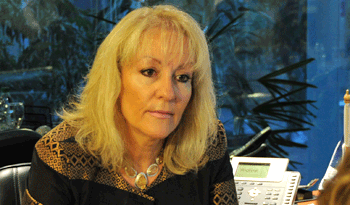 Uruguay said Wednesday that it will launch an open season tender for access to regasification capacity at the GNL del Plata offshore LNG import terminal.

Gas Sayago – the state company developing the project – will first launch a call for non-binding expressions of interest on Thursday, the country's industry, energy and mining minister Carolina Cosse (pictured) said Wednesday in a statement.

The call for expressions of interest will remain open until May 6, Cosse said, with the open season launch due June 6. Companies are required to seek at least 1Mm3/d of regasification capacity for a minimum of 10 years.

Based on the level of interest expressed, Gas Sayago will make a final investment decision on the terminal's construction.

The government has indicated it may reduce the scope of GNL del Plata, since Uruguay's domestic power needs are largely met by renewable sources.

The main commercial opportunity presented by GNL del Plata under its current design – with a daily regasification capacity of 10Mm3/d – is the exportation of regasified LNG to neighbors such as Argentina, which runs a natural gas import deficit.

President Tabaré Vázquez said in January that GNL del Plata could be complete and supplying gas to Argentina within a year.

Gas Sayago is also seeking a joint-venture partner to share the costs of finishing the terminal, following the withdrawal by France's Engie and Japan's Marubeni from the project in 2015.

Under the open season process, Gas Sayago will give offtake priority to state utility UTE and national oil company Ancap, and to any neighboring countries with whom Uruguay signs natural gas supply agreements, Cosse said.

The announcement follows the completion of dredging works for the terminal.

The updated goals will cover energy efficiency and resilience, but the government will also offer incentives for construction firms, an official said.