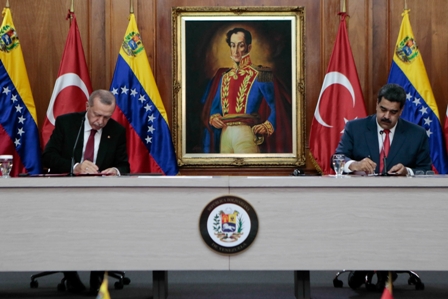 The announcement followed talks between PDVSA head Manuel Quevedo and Turkey's energy minister Fatih Donmez in Caracas, PDVSA said in a statement. No further details were given about the deal.

Later in the day Maduro boarded a flight to Moscow, where he was due to meet with Russian President Vladimir Putin.

The Venezuelan leader will also travel to Austrian capital Vienna for a meeting of OPEC and non-OPEC members on Thursday.

Last week, PDVSA said it would propose new oil production cuts during the talks to "defend the policy of balance and stability in the global market."

Venezuelan crude production has fallen by almost 1Mb/d since 2016 amid an economic crisis marked by hyperinflation, severe product shortages and a mass exodus of citizens to neighboring countries.

Analysts blame the turmoil on the government's failed policies, while Maduro says the country is the victim of a US-led "economic war."

The US-based company is using its fast-track interim solutions to offer emergency power in the South American country while infrastructure undergoe...

In the second of a two-part interview, APR Energy's Gustavo Pérez tells BNamericas how the company is helping Latin American customers meet their t...

Ineptitude and corruption triggering privatizations in the Ecuadoran energy sector

US hits Venezuela with new sanctions