Areas up for grabs in Brazil’s 17th O&G round 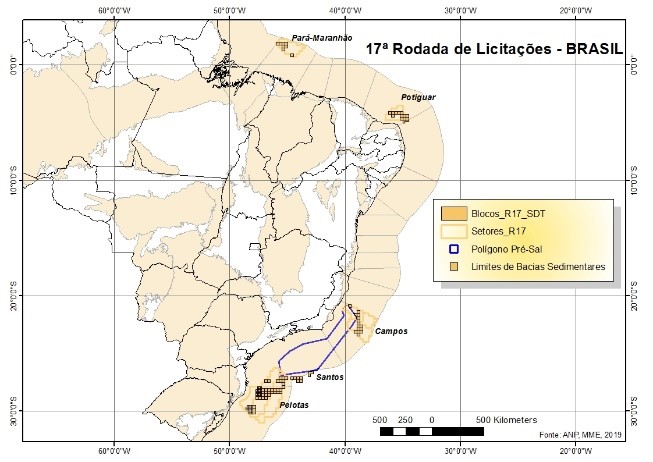 The round will be interesting for operators seeking higher risk, as regions in new frontier basins will be included, as well as six blocks beyond Brazil’s exclusive economic zone (EEZ) in Santos basin.

BNamericas takes a look at the latest information available for the regions to be auctioned.

Brazil’s oldest offshore exploration and production activity basin is now considered a mature region. It has been attracting interest due not only to the extensive geological knowledge gathered about it but also because of the existence of pre-salt and deepwater prospects. According to data from regulator ANP, geophysical surveys for the basin exist that cover most of its extension, in addition to over 3,000 drilled and over 1,000 exploratory wells. September production was 1.1Mb/d of oil and 20.5Mm3/d of natural gas. It features 24 blocks in the exploration phase and operated by six different firms.

The basin has attracted high interest in the latest auctions it is considered to have the biggest potential for pre-salt discoveries beyond the EEZ. Seismic company Spectrum recently acquired data beyond the zone that confirmed the existence of pre-salt structures. In total, the basin has over 360 exploratory wells and 3D seismic data campaigns covering almost its entire extension. It is currently Brazil’s largest basin in terms of production, with an output of 1.69Mb/d of oil and 75Mm3/d of natural gas in September. Currently, seven firms have 19 blocks under exploration in the area.

Areas of that basin have not been offered to the market since the 11th round in 2013. It is located in the Equatorial Margin and close to the Amazon rainforest, which is why watchdog Ibama is holding back environmental licenses. Currently, Petrobras operates three blocks in the basin and local firm Enauta has the other two. Yet, most of the contracts are suspended due to the licensing problems.

Petrobras is responsible for most of the activity taking place in this basin in the far south. So far, no commercial discovery has been made in the region, but ANP said previous exploration efforts have produced a considerable data volume, including 2D seismic. Only 12 wells were drilled so far, but without any oil or gas production. All four blocks under concession in the basin are operated by Petrobras.

Also in the Equatorial Margin, the entire production of 2,876b/d of oil and 251m3/d of natural gas comes from Petrobras fields. Over 240 exploratory wells were drilled in this basin so far and a total of 15 blocks are currently in the exploration phase, operated by Petrobras, Wintershall, ExxonMobil, Shell and local firm SHB.

Brazil: ANP will have 12 new blocks under study for inclusion in the Permanent Concession Offer

Want to read more information about Areas up for grabs in Brazil’s 17th O&G round?