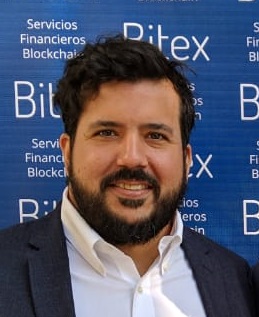 Reducing friction and costs in the payment and transfer market is a mission that financial technology companies in Latin America have embarked on.

Among those in the vanguard in the corporate segment is Bitex. It offers blockchain-based infrastructure that companies like banks can use to build international money transfer solutions that, Bitex says, are low cost, fast and secure.

As part of plans to expand its footprint in the region, the Argentina-headquartered company, which already works with local bank Masventas, expects to launch pilot projects with two large financial services players in Chile by the end of the year, Bitex chief marketing officer Manuel Beaudroit (pictured) told BNamericas.

“For next year, we see things accelerating,” said Beaudroit, who added that Bitex plans to launch similar initiatives with 4-6 financial services companies in other countries in the region next year.

He forecasts that interest will grow among the likes of banks. “As innovators break the inertia, take the first steps, I think there’ll be an upward trend in terms of adoption of this technology,” said Beaudroit, who added the company is also working on initiatives with firms in other sectors.

Globally, blockchain is gaining traction in the payments and transfer sphere. Blockchain was originally used to support cryptocurrency but is now being adopted in real-world applications.

The Bitex infrastructure leverages blockchain and bitcoin to move funds. One advantage of such solutions - and something that banks, Bitex and others are acutely aware of - is that small transfers become feasible on account of the relatively low processing costs. This makes the region’s banks and SMEs, particularly exporters, a rich seam to tap and opens up other new segments.

Among the countries with a sharp focus on blockchain is China, whose government is spurring development of the technology.

Founded in 2014, Bitex operates in Argentina, Chile, Paraguay and Uruguay and is preparing to enter two new markets in the region in early 2020. It also has a network of more than 55 payment partners in Latin America and beyond.

A central plank in Bitex’s strategy is establishing a presence in countries that have growth potential but no local Bitex partner.

Bitex officially opened its doors in Chile this year. Over the past several weeks massive protests and unrest have shaken the country.

Beaudroit said, against this backdrop, Bitex was still betting on Chile.

“Our stance on Chile hasn’t changed,” he said. “Indeed, we continue to believe there is an opportunity to provide better financial services to Chileans, despite the level of development already achieved there.

“Independent of the unrest, the protests, I believe opportunities continue to be there. We see the business in Chile continuing to grow, in part due to the tenure of the financial sector which is one of the most developed in the region, the openness of the economy and the appetite to innovate.”

BNamericas speaks with Federico Ravazzani, head of the investment banking unit for the Southern Cone at Itaú BBA, about the investment environment ...

Ualá acquisition of Wilobank is approved

Who may benefit first from eased capital controls in Argentina’s O&G sector?