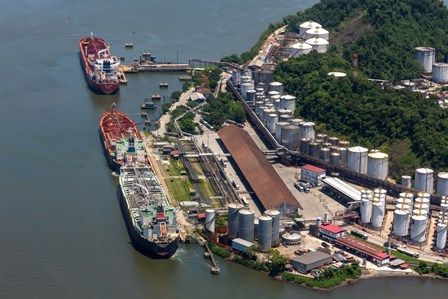 Petrobras’ logistics subsidiary Transpetro recently won the leasing tender for the STS08A (Alamoa) terminal. It committed to add berths, a pier and tanking capacity. Transpetro offered 558mn reais (US$99mn) and is awaiting approval of the results to sign the 25-year contract.

“Petrobras has specific interest in the STS08A area. This terminal allows for the flow of fuel oil, receipt of LPG and the additional movement of gasoline and diesel. Therefore, it is an essential asset for the operation of the São Paulo refineries, which are outside the company's divestment program,” Marcus D’Élia, a partner at consultancy Leggio Consultoria, told BNamericas.

As Petrobras already held the previous concession, the latest result “guarantees the continuity of its logistics through this important asset for the outflow of oil products produced at its refineries located in São Paulo,” according to a company statement.

Petrobras owns the Recap, RPBC, Replan, and Revap refineries, plus a system of pipelines and terminals in São Paulo. The waterway terminals used to move oil and oil products are in Santos and São Sebastião.

A pipeline stretch connects Santos port and the Cubatão onshore terminal, which is also connected by pipelines to RPBC, Recap and the São Caetano do Sul onshore terminal. And these are connected to the wider terminal and refinery system in the state.

In São Paulo metropolitan region, for example, a product delivery infrastructure for distributors is operating via pipelines connected to distribution bases or road transport starting at the São Caetano do Sul, Barueri, and Guarulhos terminals and at Recap.

"Considering the interest of Petrobras in the southeast region market, where it will keep its refineries, the result of the auction was already expected. It is important to improve the conditions for berthing ships," Sérgio Araújo, the president of local fuel import association Abicom, told BNamericas.

But no offers were presented for the STS08 area during the same auction. D’Élia said this is another negative signal given by private companies in relation to the opening of the refining segment amid fears of government influence on Petrobras’ fuel price policy.

"Besides the failure to conclude the sales of Repar, Refap and Rnest refineries, we now see the lack of interest in an important logistics infrastructure for importing oil products," D’Élia highlighted. He added that upcoming tenders include the one for the leasing of Paraná state’s Paranaguá PAR50 area.

Luís Henrique Sanches, of LHS Consultoria e Treinamento and former director of the Manguinhos refinery, said the next fuel terminal tenders are likely to be focused on smaller markets outside Rio de Janeiro and São Paulo states.

“Likely candidates are bulk storage companies such as the Ultra group and fuel distributors, in addition to traders such as Vitol, Glencore and Bunker One,” he told BNamericas.