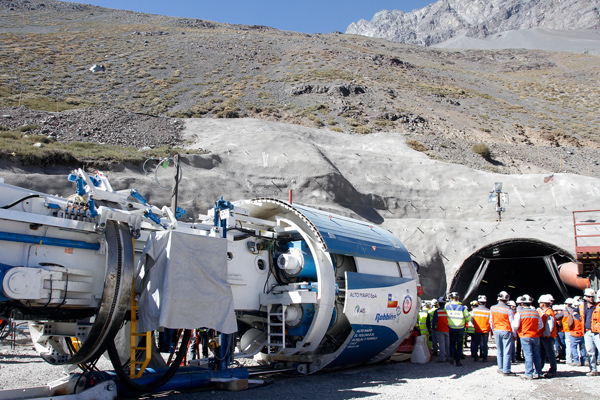 This date would be compatible with previous construction completion estimates for December.

Originally, Alto Maipo was expected to cost US$700mn and be ready in 2013, but has faced budget and schedule overruns. Its ballooning budget has made it the biggest energy project in Chile’s construction pipeline.

Alto Maipo was conceived as a run-of-the-river plant in part to avoid the fate of hydroelectric dam projects such as HydroAysén, which faced unrelenting public opposition and was canceled. The plant will use flow from the Maipo river to power two generators (Alfalfal II and Las Lajas) and return it to the river downstream.

Works included building a complex tunnel structure under the mountains surrounding the river, which has proven more difficult than expected. These difficulties and delays led owner AES Gener to disputes with previous contractor Constructora Nuevo Maipo, and both companies went to court in 2017. After the project briefly defaulted, Strabag assumed the works later that year.

Alto Maipo has also been the subject of protests by local residents, who claim it threatens water supply, tourism and agriculture in the Maipo Valley.

The Maipo is Santiago’s main drinking water source. The Yeso dam, which Alto Maipo will use for a part of its water flow, belongs to the capital’s water treatment system, but a 10-year drought has left the dam with comparatively low water levels.

Citizen groups fear Alto Maipo could pressure the dam’s operator into releasing more water for generation purposes, which could also jeopardize the city’s supply. Operator Aguas Andinas said it will retain full control of how much water is released and will use its own criteria when doing so.

Nevertheless, the situation has led to still unresolved lawsuits against AES Gener and Aguas Andinas for breaching sanitary regulation.

BNamericas' project profile page has a detailed timeline of the Alto Maipo project, including previous budget and completion date estimates.

Acera launched the call to gauge interest in providing an overview of the state of play in the sphere of territorial management regulations and pro...

The renewable energy park has a generation capacity of approx. 90 MW and already has the authorization of the National Electrical Coordinator.