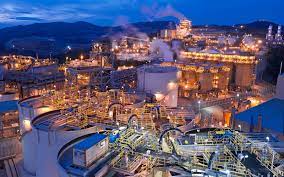 Mining companies are pushing toward production at Latin America’s biggest gold projects, despite political and regulatory uncertainty and volatile prices.

The region hosts nine US$1bn-plus primary gold megaprojects, with combined capex of around US$16.6bn, according to the BNamericas projects database.

Production from six of the projects is estimated at around 2.7Moz/y, with projected output data not available for the remaining three.

But firms face significant headwinds as they push toward production at the assets, including political uncertainty, permitting hurdles and doubts over their economic viability – with the latter heightened by the recent drop in gold prices.

Newmont expects Norte Abierto to help sustain production into the 2040s, with plans to advance the project to the pre-feasibility/feasibility stages, according to an August presentation.

This could take longer than seven years, however, according to the presentation.

Barrick lists Norte Abierto as a project offering “long-term greenfield optionality,” alongside Latin America assets including Pascua-Lama and Alturas, in its 2021 annual report.

But the companies will need to re-evaluate a prospecting campaign at Caspiche following a ruling in the Chilean courts late last year, after a dispute over potential impacts on a nearby indigenous community.

Norte Abierto combines Caspiche with the nearby Cerro Casale deposit.

Gold reserves stand at 12Moz, with a further 22Moz in measured and indicated resources and 4.4Moz inferred resources, according to Barrick.

Newmont is advancing engineering and procurement activities at Yanacocha Sulfides, ahead of a construction decision expected for end-2022.

Engineering work has passed the 50% mark, with some long lead time items ordered, and the company is nearing completion of a definitive schedule and capex estimate, which will take into account cost inflationary pressures including higher steel prices, he added.

The project aims to maintain production at Yanacocha into the 2040s.

Barrick is targeting permit approval for a tailings storage facility (TSF) around end-2022, delays to which have held back progress on the Pueblo Viejo Expansion.

The company and Dominican Republic government decided to conduct independent reviews to consider alternative locations for the dam, after a previous proposal sparked violent protests.

Two options have now been shortlisted, with Barrick planning to submit an environmental permit application for the final selection in Q3, and a decision by authorities expected late this year or early the next.

Basic engineering of the TSF is expected to be completed in Q4, with construction for a plant expansion – the other main element of the expansion project – 56% complete at end-June, Barrick said in its Q2 MD&A report.

The expansion will enable Barrick and JV partner Newmont to maintain production at Pueblo Viejo (in picture) into the 2040s.

Hochschild Mining’s Inmaculada Optimization aims to extend operations at the Peruvian mine for around 20 years, after the current mine life ends around 2023.

The company plans to complete a modified environmental impact study for Inmaculada in H2, but continues to monitor legislative, regulatory and local issues which could impact its exploration and operational activities, according to its interim results release.

Barrick Gold is continuing to re-evaluate the potential of the Pascua-Lama project, which straddles the Chile-Argentina border, with a focus on the Argentine (Lama) deposit.

“A decision is expected in 2024 on whether Lama ... meets our investment criteria for development,” the company said in its 2021 annual report.

Aris Gold has taken the reins as operator of the Soto Norte project, and aims to overcome licensing challenges and push ahead with development.

Aris – which has the Marmato mine in Colombia – acquired a 20% JV interest in Soto Norte from Minesa in April, with the option to expand this to 50%.

Since then, the company has taken charge of drafting a new environmental and social impact assessment (ESIA) after a previous application was not approved by environmental authority ANLA, according to Aris’ Q2 MD&A report in August.

Construction of Soto Norte is expected to follow its Marmato expansion.

“The company continues to believe in the project’s long-term development potential as a large, low-cost mine,” it said in its Q2 earnings release.

Any decision will hinge on factors including gold prices, economic returns, permitting and other opportunities, and timing will depend on the conclusion of mining at La Coipa about 50km away.

Lumina Gold is progressing as planned with work on a pre-feasibility study at its Cangrejos primary gold project in Ecuador, the company said in July.

The study, being conducted by Ausenco Engineering Canada, is due for completion in 2Q23.

Remaining drilling in the 2021-22 campaign was due to be completed by August.

Hochshild Mining is working toward an updated study for its Volcán project in Chile, which is being managed by a newly-established Canadian company, Tiernan Gold Corp.

Work in H1 included updating the mineral resource estimate and developing an optimized mine and project development plan, the company said in its results release.

“During Q3, the company expects to advance several trade-off studies aimed at creating additional project value,” it added, with results of engineering work to be outlined in a new technical report.

The government is making the necessary efforts to ensure that the construction schedule for mining projects can continue as planned, local mining c...

According to the latest mining report from Ecuador's central bank, Lundin Gold plans to invest US$49.9mn in its Fruta del Norte mine this year and ...