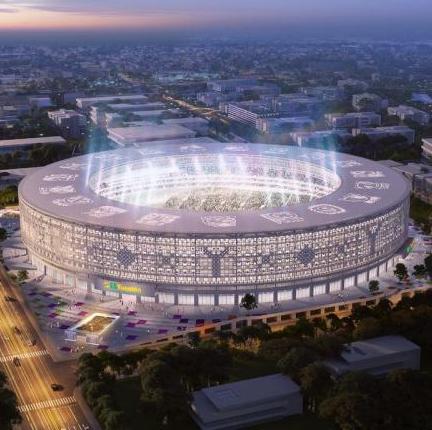 The 2026 World Cup that Mexico will host alongside the US and Canada presents a unique opportunity for the Latin American nation to construct an 8bn-peso (US$395mn) stadium in Nuevo León state capital Monterrey, says the CEO of New York-based real-estate developer Juego de Pelota.

César O. Esparza talks to BNamericas about the stadium, originally presented in 2019, and how it could serve as one of the two inauguration sites for soccer's main event.

In addition to this project, Esparza also talks about plans for the sustainable stadium project Juego de Pelota confirmed for Mérida state capital Yucatán in October and other sport complex opportunities.

BNamericas: In less than six years, Mexico will become a host of the FIFA World Cup, with 10 matches planned to take place in three state capitals. Does the country's current infrastructure support this plan? Will FIFA experts greenlight the stadium infrastructure when they visit Mexico this year?

Esparza: The stadiums that have been assigned for the 10 World Cup matches in Mexico are the Estadio Azteca in Mexico City, the Rayados stadium in Nuevo León state capital Monterrey, and Chivas stadium in Jalisco state capital Guadalajara. Both the Rayados and Chivas stadiums are modern stadiums that can host World Cup group stage matches. The biggest challenge will be to update Estadio Azteca.

There is an extremely interesting opportunity in the 2026 World Cup for Monterrey, which could host the inauguration ceremony at the yet-to-be-built National Stadium of Mexico.

BNamericas: That stadium was proposed by Juego de Pelota in 2019 to host baseball and soccer matches for up to 80,000 spectators. Does the proposal still stand?

Esparza: United 2026, the organization that is leading the North American World Cup proposal, plans two opening ceremonies, one in Canada and the other in Mexico.

For its opening match, Mexico does not have an adequate stadium because, on the one hand, the Estadio Azteca, in addition to its age, has the commercial problem related to its [VIP] boxes, which were sold out for 99 years. On the other hand, there is the problem of limited seating capacity at the Chivas and Rayados stadiums, since ideally more than 70,000 seats are required for the opening matches of the World Cup.

This opens the opportunity to the National Stadium of Mexico, in Monterrey, which is planned to be the home of the Tigres soccer club and NFL [exhibition games]. If it materializes, it will be the only new, large-capacity stadium in Mexico, which would make it the ideal setting for the opening ceremony and match of the 2026 World Cup.

In Mexico, we tend to assume that the inauguration has to be hosted in Mexico City, but no FIFA rule specifies that it has to be in the country's capital. Let us remember, for example, that Barcelona, Milan, Chicago, and Munich have hosted an opening match for their respective World Cups. Monterrey is a city that undoubtedly can host the opening ceremony of the 2026 World Cup if the National Stadium is completed on time. We are working on that and we see that there are conditions for it to start soon.

BNamericas: Which sports stadium projects are the most prominent in Mexico?

Esparza: Both the National Stadium of Mexico in Monterrey, and the Sustainable Stadium of Yucatán are projects where we are collaborating and both have enormous relevance and significance for Latin America.

In the case of the National Stadium, we are sure that it will have the same impact the Estadio Azteca had for more than 50 years, which served as a strategic infrastructure to attract the most important events in the world to Mexico.

In the case of the Sustainable Stadium of Yucatán, it is a project that is going to change the current paradigm of stadiums in Latin America, which are structures that are only used 20-30 days a year. It will be a sustainable stadium in social, environmental and economic aspects. It will be the first stadium in Mexico to achieve LEED Platinum Certification. It will also be the first with the flexibility to host soccer and baseball with an extraordinary technological rotation solution, which will allow, on the one hand, promoting the realization of a first division soccer franchise in Mérida, and on the other, to attract Major League Baseball regular-season games to a safe and beautiful city such as Mérida.

Likewise, the Sustainable Stadium of Yucatán will be the first in Mexico to have a hotel with rooms that will become a stage during events.

BNamericas: What are Juego de Pelota’s plans for the Sustainable Stadium project? When will construction begin and who is participating? Will you deploy any special technologies during construction?

Esparza: In Yucatán we have found a favorable climate to investment in all aspects and with a decisive, enthusiastic and visionary governorship which, unfortunately, in our experience, is more the exception than the rule in Latin America.

Yucatán not only represents the past of Mexico for being the capital of the Mayan world, but it also represents the future of Mexico's economic development. Yucatán is, in short, one of the best places to invest and develop avant-garde work like this. The plan is to begin construction of the Yucatán Sustainable Stadium during the third quarter of 2021, and we project that it will be completed in 24 months.

BNamericas: Do you think Mexico has reached its stadium limit or can it expand further? If so, what is needed?

Esparza: Mexico lacks sustainable sports infrastructure in all cities. By sustainable I mean three axes: social, economic and environmental. The need for sustainable sports infrastructure is not limited to large cities with first division soccer teams or baseball teams from the Mexican League or the Pacific League. We believe that in small or medium-sized cities, with about 100,000 to 400,000 inhabitants, it is also possible to promote this type of projects, which can be achieved through the participation of states or municipalities and with well-thought-out projects so that they can be done with private investment in schemes that benefit everyone.