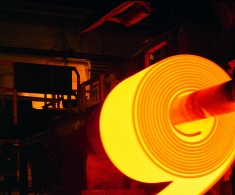 Brazil's foreign affairs ministry is reportedly holding talks with the EU on the possible imposition of a system of safeguard quotas on steel imports by the European trade bloc from the South American country.

The restriction, on which the EU will vote on January 16, could affect seven types of steel that Brazil exports to the EU, namely cold-rolled sheets, sheet metal, flat-rolled stainless steel, hot-rolled flat steel, thick plates, profiles, and other seamless steel pipes.

"The Brazilian government has been following the EU investigation into safeguards on steel imports as an interested party since its inception in March 2018," the ministry was reported as saying by daily O Estado de S. Paulo.

"On January 4, the EU notified the WTO of the results of the investigation and its possible decision to impose safeguards on imports of steel from all over the world," the ministry added.

According to the report, a quota will be offered for each country. If the volume exceeds the quotas, an extra fee of 25% will apply. China, for example, will be restricted on 16 different products, compared to 17 for Turkey and 15 for India.

Brazil exports about 15Mt/y of steel, with revenues reaching US$9.5bn. Around 25% of the total goes to Europe. In 2017, some 3.9Mt of steel were exported to the bloc. Part of this volume relates to semi-finished steel products, which were not included in the list of restrictions, the report states.

The impact on Brazilian exports will be in sales of cold-rolled products (used by the automotive, machinery and equipment industries), heavy plates (shipbuilding) and metal sheets (packaging), among other types of steel.

Other steel producing countries that could be affected by the restrictions are Russia, South Korea and Ukraine.

To help the efforts, mines and energy minister Alexandre Silveira urged the mining sector to diversify.

The sector has flourished in the northeast Brazilian state recently, partly thanks to rail projects that have reduced logistics costs for mining fi...

Spotlight: The capex plans of some major Brazilian miners