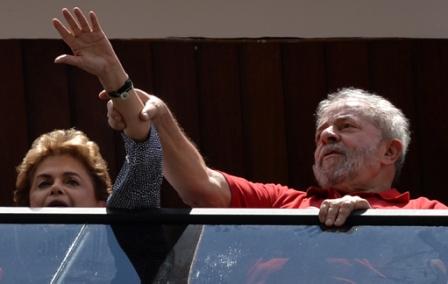 According to local media, Lula changed his initial decision to turn down a position in the Rousseff administration following Sunday's pro-impeachment protests, the largest the country has ever seen.

As a minister, Lula would be more protected from the charges against him, which are now in front of federal judge Sérgio Moro, who is overseeing the so-called Lava Jato investigation tied to a graft scheme to secure contracts with national oil company Petrobras.

Lula is accused of money laundering and misrepresentation for allegedly concealing ownership of an apartment provided by construction company OAS. The construction firm is being investigated by Moro as part of Lava Jato.

As a minister, the former president's arrest would have to be authorized by the supreme court, putting him in front of a different judge.

IstoÉ Dinheiro reported that Lula has not yet officially announced his decision, but that both the ruling workers' party and the federal government will accept the post. The administration has also not made an official announcement because it is reportedly consulting with its legal team to confirm that Rousseff cannot be charged with obstruction of justice if Lula were to face charges.

BNamericas speaks to the CEO of a local asset management firm about the possibility of the Lula administration reinstating fuel taxes to boost gove...

A critical week for democracy in Brazil

Take a look at our coverage of what happened in Brazil after Bolsonaro's supporters stormed the Congress.