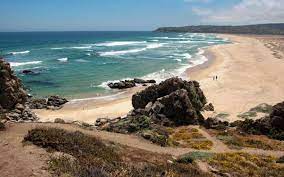 Senate discussion on a desalination bill has stalled until Chile’s executive submits an observations report to the water resources committee.

Desalination is seen as one solution to alleviate the severe drought affecting the country.

Discussion on the bill began in congress in 2018.

“I would have liked for this to be more swift,” the head of water regulator DGA Óscar Cristi told the senate committee.

He said the biggest point of contention in the government is related to the role of the armed forces, which are currently granting and managing maritime concessions.

Under the proposal, DGA would grant the concessions, but only after receiving the green light from the armed forces, which some government actors worry will prolong the process, Cristi said. Currently, it takes three years on average to obtain a maritime concession.

But Cristi favors keeping the armed forces involved because of their observation capacity along the coastline. He expects the executive to reach an agreement in no more than three weeks.

Ownership is another contentious issue. While seawater is considered a public asset in the bill, it does not specify the legal nature of desalinated water.

However, Cristi clarified that most desalination plants in Spain were built by the state, which granted operations concessions to the private sector. Chilean plants are privately built.

Agreements have been reached on maritime desalination concessions remaining valid for 25 years, with the possibility of renewal.

But concessions could also be voided under expiration terms currently used for water rights, or if physical work on the desalination projects doesn’t begin within 10 years after concession approval.

In the senate, Cristi was asked about the US$466mn Catemu reservoir in San Felipe province, Valparaíso region.

A tender for the construction and operation of this dam was launched in 2017 but was halted by the public works ministry (MOP) because it wanted to carry out the environmental impact studies and not leave them to the tender winner.

Cristi said studies are ongoing, while completion is far off.

Smaller reservoirs have been proposed for the area in the meantime, which would alleviate the zone’s water problems but not replace the reservoir.

According to the MOP’s concessions office, the project will be tendered in the last quarter of 2023.

It entails a 180Mm3 (million cubic meters) reservoir and a 1.2km contention wall to provide water for 26,577ha.

According to an official from the State Department, Chile can contribute to make the Western Hemisphere self sufficient in terms of energy through ...