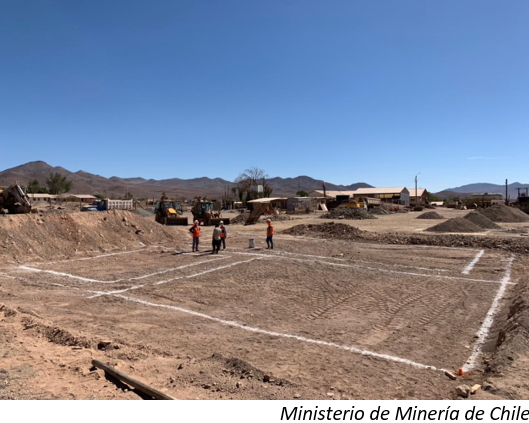 Chile’s Atacama region will invest 792mn pesos (US$1mn) in improvements at three small-scale gold processing plants in Chañaral, Copiapó and Huasco to prevent the use of mercury.

According to a press release, the first facility to be improved is La Nenita 1, which belongs to the Inca de Oro mining association. The 234mn-peso investment will help increase the gold recovery rate to 75% from 45%. Works are covered by regional development fund FNDR.

State copper miner Codelco has awarded a US$200mn contract to a consortium led by Spain’s Acciona for construction at the US$4.7bn Chuquicamata underground project in Antofagasta region.

Excavation works will take three and half years and generate around 1,000 jobs.

The project involves a three-level conversion of the open pit mine into an underground operation. By the end of last year, the first level was 99.5% complete.

Iodine and salt producer Cosayach has submitted a US$1bn project to environmental watchdog SEA, seeking to extend the life of the Negreiros facility by incorporating new exploitation concessions.

According to the document, the monthly mining rate will remain at 1Mt of caliche but it will be extracted from two deposits near Huara town.

The Negreiros facility is in operation since 1996 in Tarapacá region.

The Chilean subsidiary of BHP wants to reprocess tailings from a site in Antofagasta region.

The copper mine, which began full production in 2017, belongs 70% to Chile's Antofagasta Minerals and 30% to Marubeni Corp.

Anglo American Chile looking to raise efficiency, cut water use in a challenging 2023