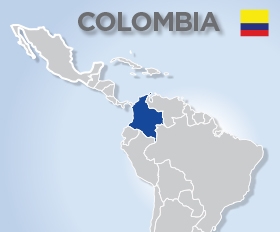 Authorities in Colombia's drought-hit Cundinamarca department are putting together a development plan aimed at setting in motion a series of public works in a number of sectors, with a focus on projects that will mitigate risks of climatic events.

Government officials in the department have proposed measures that will be considered in Cundinamarca's development plan, which is to be launched under governor Jorge Emilio Rey's administration (2016-20).

Authorities are seeking to advance the construction of two reservoirs that have been studied under past governments, local news agency Noticias Día a Día reported.

Construction of the reservoirs is to be prioritized, along with further potable water and wastewater treatment infrastructure that would help fend off drought, which has been particularly pronounced in Cundinamarca.

The first reservoir is envisioned to be built in San Rafael, a sector near the La Aguadita rural subdivision southwest of Colombian capital Bogota, where it would supply the towns of Silvania, Pasca, Tibacuy and Fusagasugá, and potentially the town of Arbeláez if the technical conditions allow it.

The project is said to be well advanced with preparation of the relevant documentation, where the required investment in the reservoir has been estimated at 40bn pesos (US$12mn). However, the actual cost could potentially double given the devaluation the peso against the US dollar, according to the news agency.

The second reservoir would be situated near the Cuja river and would supply residents of southwestern parts of Sumapaz district.

Both reservoirs would supply water for human and agricultural consumption.

Fresh oil rounds, the increasing deterioration of the Argentine economy and growing fears over a conflict between Colombia and Venezuela. It has be...

What can AI and digitization do for utilities?

LatAm presidential approval ratings: The good, the bad and the ugly

Other projects in: Water & Waste (Colombia)