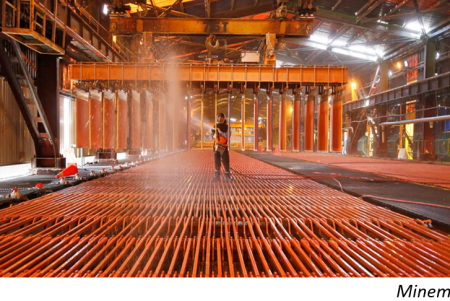 The drop in global copper prices bottomed out several weeks ago, but there will also be lower consumption due to the effects of COVID-19, which has impacted both Chinese demand and production from various companies around the world.

In the teleconference The Copper Market in the COVID-19 Scenario and Peru's Competitiveness, Erik Heimlich, principal analyst at the consultancy CRU, pointed out that, although the pandemic led to a significant decrease in the price of the commodity, it hinted at a recovery when China managed to contain the advance of the virus and began to reactivate its economy.

The specialist added that the stimulus package outlined by China to get its economy going again – focused on infrastructure, urbanization and large projects – is good news and is having a positive effect on prices of the red metal, along with the reopening of the economy in various countries.

Despite the upturn, Heimlich predicts that "the major regions will see a fall in production in 2020 and the projection for copper consumption in 2020 is for a 4% drop globally."

According to the analyst, in 2020 around 600,000t of production of the metal was lost, some 450,000t due to operational suspensions and the rest because of changes to plans considering the low prices and uncertain scenario.

"We are at a moment when production risks are very high," he said, although he added that he does not expect mine closures.

The analyst said that one factor to consider is what happens in Zambia and Congo, two large copper producers, since the trend in COVID-19 infections in Africa is different to the rest of the world and will likely intensify in the second half of the year.

During the period, there will be a greater emphasis on brownfield projects and average delays of between three and six months will be seen in projects already confirmed. This alteration of the markets and price uncertainty will lead to an active period of mergers and acquisitions, he concluded.

Ternium complex still ground to a halt over disappearance of activists

The wife of a Mexican human rights lawyer who has disappeared, along with another local activist, talks to BNamericas about the community's demands.