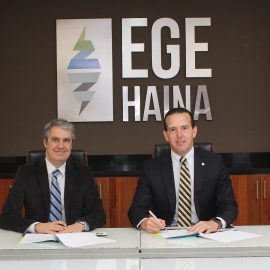 Santo Domingo.- Empresa Generadora de Electricidad Haina, SA (EGE Haina) and Falconbridge Dominicana ( Falcondo ) signed an agreement to buy and sell photovoltaic energy to be used in the mining operations of the company.

The long-term contract signed between both companies establishes that EGE Haina will supply Falcondo, as an unregulated user of the National Interconnected Electrical System (SENI), part of the energy that this company requires for its production.

The energy will come from the production of the Girasol Solar Park, which EGE Haina will build during the next months in the Yaguate municipality, San Cristóbal province, and which will have a capacity of 120 MW.

The agreement was headed by Luis Mejía Brache, General Manager of EGE Haina, and Ioannis Moutafis, President of Falcondo.

Mejía Brache expressed his satisfaction of "contributing to Falcondo's operations through the production of the Girasol Solar Park, which will be the largest photovoltaic power plant in the country," he said.

With this agreement Falcondo will replace part of the thermal energy it uses in its facilities with renewable energy, and will thus become the first mining company in the Dominican Republic to use renewable energy in its operations.

Ioannis Moutafis, president of Falcondo said that “this agreement shows that mining can operate in an environmentally friendly way. We thank EGE Haina for the execution of this project, which is a milestone, not only for Falcondo, but for the entire nation. ”

About the Girasol Solar Park

The Girasol Solar Park, which will be operational in January 2021, will be built on a 220-hectare site, where solar irradiation is higher than the average in the Dominican Republic.

The project will include the installation of some 300,000 photovoltaic modules, a 150 MVA power substation and a 10 km long transmission line that will operate at 138 kV.

The Solar Park Girasol will be the first project of its kind in the country to implement the technology of solar trackers or trackers, which will increase the capacity of the project as there will be a greater use of solar irradiation.

The construction of the work will require the hiring of more than 300 people, mostly local labor located in the immediate vicinity of the project.

Combined output at eight of the region’s top gold producers is expected to decline to around 3.46Moz, down about 7% from 3.72Moz last year.

Proven and probable gold reserves at the Canadian major's Latin American assets fall with those of copper also down.

What does COP26 mean for LatAm’s mining sector?

2022: A year of rising costs for miners in Latin America?