Evo Morales lashes out at Bolivian president over public works 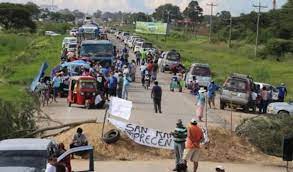 Morales told Radio Panamericana that “there’s a permanent feeling that works are missing,” claiming that he has documents that would back accusations of corruption against public works minister Édgar Montaño.

Over the past few weeks, Morales and social organizations close to him have criticized the government, and especially minister of government Eduardo Del Castillo over his anti-drug policies.

An attempt to impeach Del Castillo over crime rates in the city of El Alto, next to La Paz, and alleged irregular payments to police officers failed to garner enough votes in congress last month.

After the vote, opposition lawmakers were quoted by daily La Razón as saying that the vote was an attempt by Morales and hardliners in the ruling leftist MAS party to impose their position on Arce’s government.

Last weekend, during a cocalero (coca leaf producers) summit in Cochabamba department, speakers threatened to block roads if Del Castillo is not removed.

While Morales, who founded MAS but was ousted as president in 2019, did not endorse the demand, other sectors sounded the alarm over the effects of new road blockades.

“Transport is the most affected sector in all the country, because one blockade appears, it ends and then another blockade appears. Therefore, I believe that the government needs to find an endpoint for this,” Juan Yujra, head of the country’s heavy freight transport confederation told Radio Fides.

Yujra was referring to blockades in late May and early June in Santa Cruz department, where locals and municipal authorities blocked major highways demanding road investments from the departmental government, which in turn accused the MAS party of being behind the mobilizations.

The head of Cochabamba’s chamber of commerce and industry, Ramón Daza, told Radio Fides last week that those blockades caused US$500mn in economic loses, and demanded an alternative route to the Santa Cruz-Beni highway.

Regarding who is responsible for those roads, the construction chamber of Santa Cruz told BNamericas via email that they are awaiting a technical and legal report from advisers before weighing in on the debate, but said that “these are issues that are concerning for the institution.”

Lima municipality pushing ahead with roadworks

City hall is pressing ahead with major roadworks, while the new administration is also renegotiating controversial contracts.

Infrastructure: The week in 10 stories

Other projects in: Infrastructure (Bolivia)

Other companies in: Infrastructure (Bolivia)

Want to read more information about Evo Morales lashes out at Bolivian president over public works?