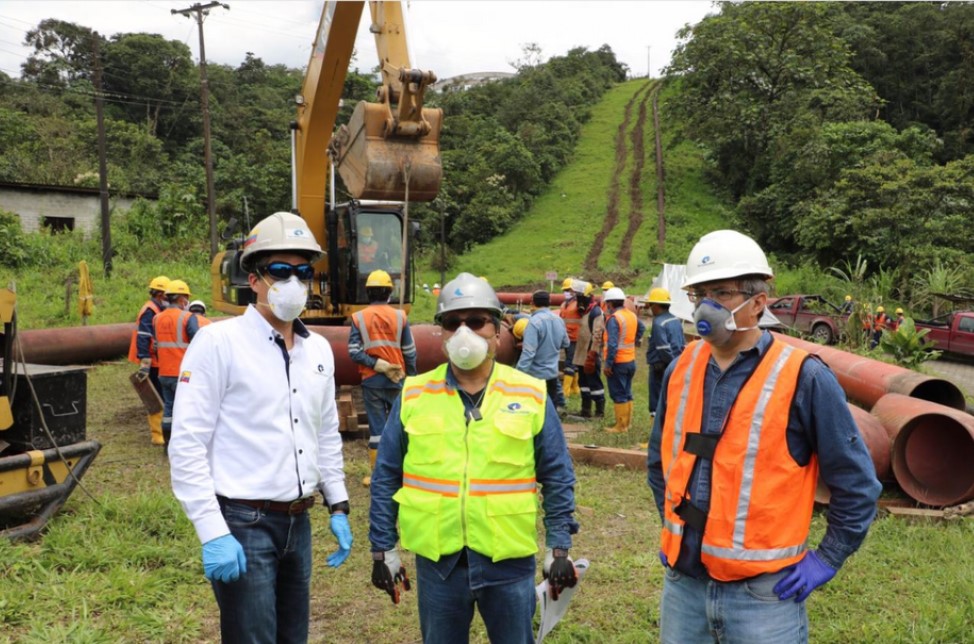 The General Manager of EP Petroecuador, Pablo Flores, fulfilled an agenda of activities in the provinces of Orellana and Napo, where he led and supervised the construction works of the SOTE variant and the Shushufindi - Quito Pipeline, pipelines that were affected by a sinkhole occurred last Tuesday, in the San Rafael sector; The natural event also caused damage to the private Heavy Crude Oil Pipeline (OCP) Ecuador and generated an oil spill in the Coca River.

The Manager verified the progress of the works, where Company personnel work long hours to enable the two variants of the pipeline, which will have an extension of approximately 1.8 km and it is estimated that they will be ready by the end of April. He also highlighted the effort made by the Petroecuador team in conjunction with the Army Corps of Engineers "the weather conditions are not the best, I highlight the commitment of all workers, to resume the transportation of hydrocarbons from the Amazon region to the province of Esmeraldas, an activity of vital importance to the country's economy, ”he said.

It should be noted that due to the health emergency due to the spread of Covid-19, strict health protocols are followed in the area where the work is carried out, a medical team is permanently on site to carry out daily checks on all personnel and guarantee their wellness during the day.

The General Manager also participated in an overflight over the area of influence of the spill and toured the Coca River to verify the mitigation and remediation actions that were strategically implemented since the beginning of the emergency in coordination with officials from the OCP Ecuador company and the Ministry of the Environment.

In the city of El Coca, he carried out, in the company of local authorities, a tour to verify the status of the water intake. He also assured that one of the Company's priorities is the provision of the vital liquid for the affected communities and for this, bottles are distributed jointly with OCP Ecuador and the logistical support of the Armed Forces.

Pablo Flores made a technical tour in the sector known as Los Monos Canyon, in the La Joya de Los Sachas canton, where he supervised the hydrocarbon containment actions that have been carried out at this point from the moment the emergency was activated.

The Contingency Plan contemplates the placement of containment barriers, constant monitoring at different points of the river to carry out immediate cleaning actions and the taking of water samples to evaluate its quality. Petroamazonas EP and the Corporación Eléctrica del Ecuador (CELECEP) also joined forces and activated three control points on the Napo river, as well as the cleaning of crude oil with absorbent barriers in Block 31.

Officials from Petroecuador's Environmental Restoration area are in the area and comply with technical protocols to continue with the removal of contaminated material.

Official Statement: Regarding blockages in the access road to Block 16

Petroecuador maintains the delivery of fuels for thermoelectric plants

EP Petroecuador supplies block 16 by air with inputs for production

Want to read more information about General Manager of Petroecuador supervised construction work on the new variant of SOTE and Poliducto?