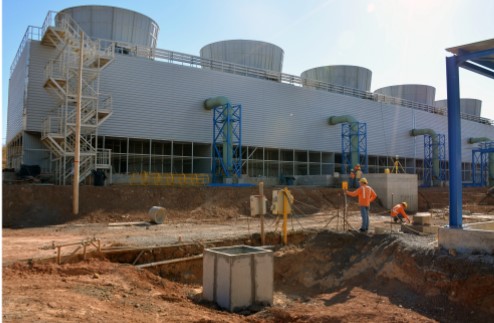 The Las Pailas II Geothermal Project is in an intense testing phase to integrate into the National Electric System (SEN) and generate sustainable electricity before the end of the first half of 2019. By the end of November, its construction progress exceeded 93%.

This final phase aims to start up the equipment and systems of the geothermal field, the powerhouse and the transmission works.

The plant, located in Liberia, will have 55 megawatts of installed capacity, firm and renewable, which will serve to ensure the base of the electricity demand curve.

Didier Ugalde, coordinator of construction and commissioning of Las Pailas II, explained why this stage is essential: "For example, we completed the blowing of the two collectors that carry the geothermal steam to the turbine of the powerhouse. the cleaning of the pipe and ensures that the fluid has the required conditions according to the design ".

In addition, he commented that the advance of well drilling and the construction of the steam haulage and fluid reinjection works allowed to initiate the integrated tests of the deposit. These are the ones that supply the adequate and stable supply of the geothermal resource to start the generation of the plant under full load.

Las Pailas II will allow Costa Rica to consolidate its continental leadership in electricity generation from volcanic steam. It will be the seventh plant of this type in the country, with which the SEN will add 262 megawatts of installed geothermal capacity, the third highest in the Americas, together with the United States and Mexico.

The 21 wells of Las Pailas II are 100% directional - the perforations are not vertical, but rather diagonal - and have an average depth of 2,000 meters. Construction work on the plant began in April 2013.

This ICE release was published using an automatic translation system.

Reform seeks to align the terms of tax incentives with the international commitments that the country has assumed to achieve carbon neutrality in i...

Obtained a clean opinion from the auditing firm. Decrease in income is due to tariff fixation. Operating surplus reaches ₡183,913 million and the E...

Renewable electricity generation in Costa Rica would reach 98% in 2022