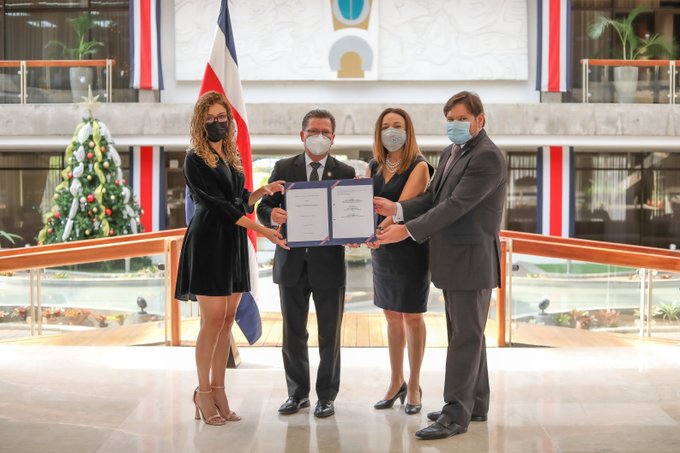 This Presidency of the Republic release was published using machine translation.

This morning, the President of the Republic in office, Marvin Rodríguez Cordero, signed the "Law 10086 Promotion and Regulation of Energy Resources Distributed from Renewable Sources". The new legislation was also signed by the Minister of Environment and Energy, Andrea Meza, and the Minister of Public Works and Transportation, Rodolfo Méndez Mata, who had done so in advance.

The law establishes the conditions to promote and regulate activities related to access, installation, connection, interaction and control of energy resources distributed from renewable energy sources. All this, integrated in an efficient, safe and sustainable way.

With distributed generation, organizations produce the electricity consumed in Costa Rica, and give subscribers space to generate their own energy in the same place where they consume it.

The incumbent president, Marvin Rodríguez, agreed that this law will make it possible to have much clearer legislation on this matter, which will provide legal security to an activity of great importance for energy development. He also celebrated the promotion of new technologies that are given thanks to the decentralization of energy networks.

For her part, Minister Meza pointed out: “With this signature, we give a clearer and more consistent legal framework to this distributed generation effort. The world is moving towards decentralization and Costa Rica must have clear elements to be part of this transformation process, which recognizes the strength of renewable energies ”.

Deputy Paola Valladares, who witnessed the signing, said: “This law provides legal security and governance to an activity that has been developing for many years in the country. We are facing the possibility of democratizing the consumption of electricity production. This is a fundamental step for the energy sector, towards the solidarity model of the XXI century ”, expressed legislator Valladares.

"This is a very important law, which allows us to take all the good things that we advanced during the second half of the 20th century and build a regulatory framework that allows us to advance in the 21st century," said Ernesto Moreno, president of the Costa Rican Chamber of Energy Distributed, who also participated in the event.

A review of developments in Honduras, El Salvador and Costa Rica.

The turnaround was driven by higher sales in its electric power and telecommunications business lines.

MINAE opposes the exploitation of geothermal energy in National Parks