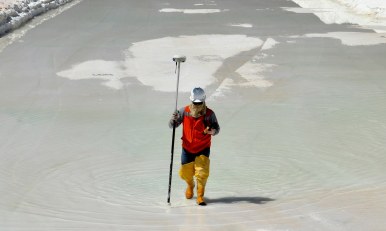 Orocobre cut its output guidance for its Olaroz lithium facility in Argentina due to heavy snow.

Production at the Jujuy province asset was suspended for three days last week after stocks of soda ash, a key process reagent, were depleted as a result of a three-week closure of the Paso de Jama road under heavy snow.

Paso de Jama mountain pass through the Andes is the northernmost road border crossing between Chile and Argentina. The pass has since reopened allowing soda ash stocks to be replenished, Orocobre said in a release.

A backlog of exports at the site due to the adverse weather conditions has been cleared, the company added.

Snow and freezing conditions significantly affected mining and transport of water at the Tincalayu mine, part of Orocobre's Borax Argentina operations.

Processing was suspended for 10 days, resulting in the loss of about 700t of decahydrate equivalent production.

The Sijes operations were less affected, with about 200t lost concentrate output and export delays.

"Our planning saw us holding the maximum level possible of consumables with additional contingency measures in place," CEO Richard Seville said. "However, it was not sufficient to see us through this extreme event."

The overall process of re-profiling the pond brine inventory is developing as expected, despite the impact of the weather conditions, he added.

At a glance: 3 Argentine lithium projects due to start up in 2023

The plant will have annual production capacity of 1,000 batteries for renewable energy storage or 50 for electric buses.