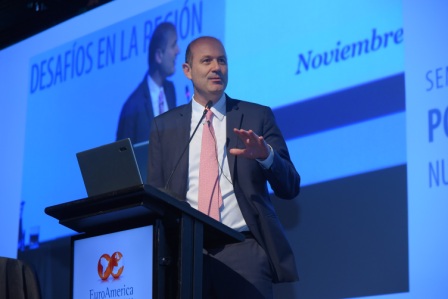 A slowdown in core inflation is said to be behind the Argentine central bank's Wednesday cut to its benchmark interest rate but there are doubts if this is really the case.

The monetary authority cut the interest rate on the 35-day central bank bonds known as Lebacs to 37.5% from 38%.

"A drop in core inflation in April compared to March," was the explanation given by central bank president Federico Sturzenegger for the rate cut, according to local paper Cronista.

The publication of inflation statistics has been temporarily suspended as the government that came to power in December is seeking to improve the credibility of the statistics that the previous government produced.

Sturzenegger had pledged a tight monetary policy until "clear and persistent signals of an inflation slowdown." But the cut came amid growing pressure for easing the monetary policy, Cronista reported.

"It has taken me by surprise because there are no signs yet that the core inflation the central bank looks at has decelerated," Diego Giacomini, director at Economía & Regiones, was quoted as saying by Cronista. "This makes me think that the monetary authority has received strong pressure from the political wing of the government."

Core inflation does not include temporary price increase such as the steep tariff hikes recently implemented by the government. Overall inflation reached close to 7% in April for the highest month-on-month print since 2002, according to Cronista.

Life Insurers: The impact of COVID in Argentina, Colombia, Mexico and the Caribbean

A recent regional investigation carried out by the consulting firm Milliman and led by the consultants Fernando Mesquida, Héctor Gueler and Ariel H...

How LatAm mining, oil firms could avoid a ‘tobacco moment’

The nemesis of Argentina’s capital market

Spotlight: The state of LatAm economies and government responses

The insurance outlook for Chile, Argentina as coronavirus winds gust

Other companies in: Insurance (Argentina)