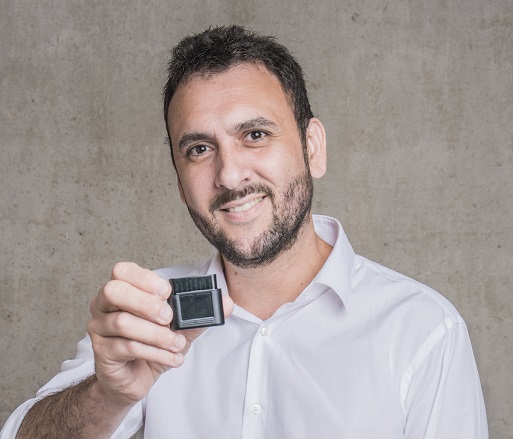 Chilean connected car insurtech Jooycar has entered the US – and seeks a juicy slice of the American pie.

Jooycar, which also operates in Peru and Mexico, is the first Latin American auto insurtech to launch operations in the economic powerhouse.

Market size and opportunities make the US a natural growth target for the company, Jooycar CEO Rodrigo Labbé (pictured) told BNamericas, adding that expanding within and beyond the region was vital to Latin American tech startups seeking a place on the global stage.

Leveraged from US-headquartered venture capital firm HCS Capital’s network, Jooycar has opened offices in California and launched digital fleet management solution Fleetr, powered by IoT technology. An associated app shows business owners, for example, where fleet vehicles are, how they are being driven and whether engines are being left idling. To access and communicate vehicle data, an associated Fleetr device plugs into the vehicle's OBD-II diagnostics port.

“The entrance into the US is the coronation of a process that we designed almost three years ago,” Labbé said. “We first had to expand in Latin America, mature our technology, mature our software … the step is far from an impulsive move; it’s the fruit of a carefully devised strategy.”

Jooycar wants to grow its US footprint. The company – in which HCS Capital was an early investor – has launched a funding round that aims to fuel its US plans.

The target, Labbé said, is to raise capital “to be able to provide the company the resources that will allow us to accelerate our expansion in the US.”

Officials want to increase the company’s penetration in the small fleet segment and, via the development of business ecosystems, offer a tailored insurance product via the digital channels, and provide a unique value proposition for managing fleets in its segment.

“This is the core of our expansion, along with continued growth in Latin America,” said Labbé.

In Latin America, Jooycar was founded in 2014 by Chilean entrepreneurs María Paz Gillet and Emilio Figueroa. The company is focused primarily on the B2B2C segment. The firm offers a white label pay-as-you-drive and pay-how-you-drive comprehensive platform to insurers, delivering usage-based insurance products to final customers in the auto insurance segment.

In contrast, the company’s US strategy is firmly fixed on commercial clients, namely SMEs with fleets of up to 15 vehicles.

“In terms of personal lines, there is quite a lot of competition [in the US]; there are companies doing it well … and COVID-19 has accelerated things,” Labbé said.

“So, there is supply in the market for this; but we think that in terms of commercial lines, the situation is very different,” he said.

The US already has fleet management solutions, but these are largely geared to heavy goods vehicles or to large fleets. The price associated with these products – of around US$30/month per vehicle – and the demands placed on company staff time “disincentivize SMEs from purchasing them”, Labbé said.

“And the focus of the application is simplicity. That is the major focus and differentiator. It’s made for small business owners.”

In the region, Jooycar works with insurers and reinsurers instead of going directly to market. “A potential future business seam to mine is offering commercial lines to SMEs via these partnerships”, Labbé said.

In Chile, Jooycar works with insurers Sura, Zurich, HDI, Consorcio and Renta Nacional. Also, the company works with Rímac in Peru and Quálitas in Mexico.

In the past two years, Jooycar's sales volume has expanded sixfold, and income has quintupled. In terms of personal lines in Latin America, there is an “enormous opportunity,” said Labbé. He cited the fact that around 70% of vehicles owners do not have the likes of comprehensive vehicle insurance.

Jooycar is adding functionality to its usage-based insurance solution, with digital tools that help owners to save fuel and avoid getting a flat battery. Consumers can also purchase mandatory traffic accident insurance – typically known in Latin America as SOAP and which helps cover medical and legal costs – through the solution.

Pronatel executed more than S/276 million between January and August

In August, the greatest progress in execution was in the broadband projects of San Martín, Ica and Puno.

Digital platform in the pipeline to boost LatAm electrification

At a glance: AI use in Latin America

Representatives of radio broadcasters associations propose to the MTC to review the schedule of the analog televisi...

At a glance: The Peruvian ICT market in 2Q22