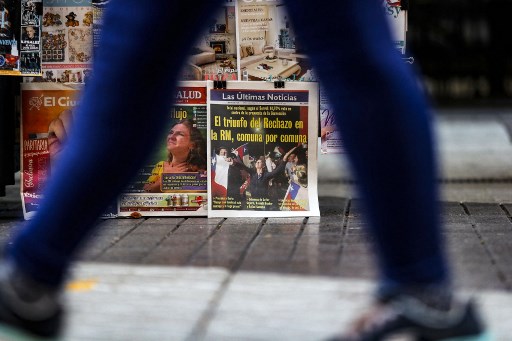 Nearly 62% of Chilean voters rejected the proposed new constitution on Sunday, with representatives of the mining industry pleased that the draft Magna Carta will now not be implemented.

President Gabriel Boric reacted by calling on the country's political parties, social movements and representatives of civil society to address the continuation of the constituent process, since an overwhelming 78% of Chileans voted to change Chile's current constitution back in 2020.

Joaquín Villarino, president of Chile's mining council, stated in a Linkedin post that he was aware that the demand for a new constitution is still alive, which will continue pressing the mining industry to reduce its emissions and water consumption, in addition to encouraging greater use of renewable energies and technologies.

The text of the proposed constitution had a strong focus on the involvement of the State and environmental issues, but created some uncertainty with issues such as the elimination of the senate, the lack of definition of private property in certain areas and the plurinational character of the country, suggesting that Chile would be constituted by a series of groups, instead of being recognized as a single nation.

In mining terms, the failure to outline any guarantees for mining property or the proposal to make it illegal to carry out mining in glacial zones or protected areas determined by law produced doubts about which territories would be the object of these definitions. Consequently, there were concerns that the sustainability of some mining projects could be seriously impaired.

Jorge Riesco, who recently took over as president of national mining association Sonami, said in a release that Sunday's vote provides the opportunity to draft a new constitution where progress can be made on social issues, in addition to ensuring free enterprise and national economic growth, both of which are essential to give stability to the changes that Chile requires, he added.

Andrónico Luksic, member of the Luksic business consortium, which is the majority owner of Antofagasta plc, praised the exit referendum result and called on the country to leave behind divisions and violence and move towards a new constitution that is "well done, that reunites us and drives the future," he said on Twitter.

“Chile's rejection of the constitutional proposal removes certain political concerns that could have resulted in higher structural public spending and other potentially negative credit developments for the sovereign. However, uncertainty remains about the next phase of the constitutional reform process, which could weigh on policymaking and investment until there is a clearer definition,” William Foster, vice president of Moody's Investors Service, said in a statement after the referendum result was made known.

Chile's mining chamber, through president Miguel Zauschkevich, pledged its support for the new constitutional process and called for all parties to work together towards a country with equity, that promotes investment and which allows the productive development of mining.

Pictured: A newspaper front page depicts the rejection of the new constitution