Where are Peru's gold exports coming from? 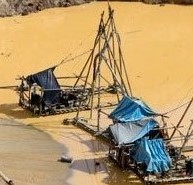 The gap between Peruvian gold production recorded by the energy and mines ministry (Minem) and exports reported by the central bank suggest that numerous illegal producers are operating in the country.

The central bank reported gold exports of 3.09Moz between January and July, but Minem registered production of only 1.76Moz, with the balance not accounted for.

The central bank figures “include gold exports not registered by customs,” referring to companies that participate in production by collecting raw gold from small miners and processing it into an export product. Processing facilities are mainly on Peru’s southern coast.

Formalizing miners has not been successful, as only 10.9% of the 88,811 that were in the formalization database had received permits as of the end of 2020.

Various entities, particular US and Swiss ones, support artisanal miners with pollution-limiting and traceability technology.

During this phase, social and environmental impact projects were co-financed for artisanal miners, who received training and US$1,000/kg of gold exported to Switzerland.

Official data on the number of artisan gold producers or illegal exports does not exist, however.

Former energy and mines minister Jaime Delgado said in June that some 400,000 artisanal and informal miners were operating in the country.

Energy and mines minister Iván Merino proposed the formation of a working group during a meeting with artisanal mining leaders in early August to draw up a blueprint for a new mining formalization law.

Meanwhile, gold production from major mines like Yanacocha is declining, falling 30.4% year-on-year in January-July to 149,972oz.

The Newmont-controlled company expects to boost production levels with the Yanacocha Sulfides gold-copper project, which is in the final feasibility stage, Minera Yanacocha mine manager Edwin Colque said recently.

Newmont will decide on project financing in December.

The start of operations in September contributed to copper production turning around the negative balance accumulated for August. The same does not...

Peru mining investment on track to plunge in 2023

Want to read more information about Where are Peru's gold exports coming from??