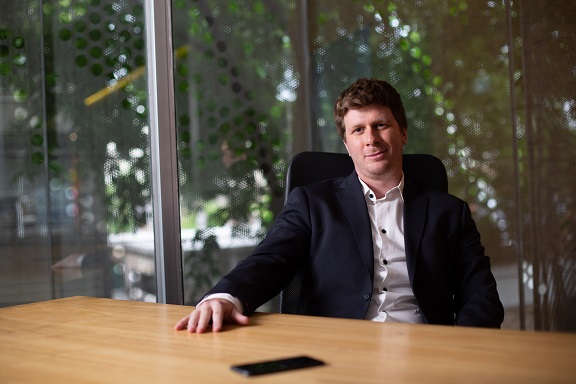 Recycling trash, cycling to work or paying taxes on time - all these actions earn residents of one Argentine town credit which they can spend in local shops.

Taxpayers use an associated digital wallet that stores fiscal credits awarded in the form of digital tokens for certain civic actions – which can then be exchanged for goods at participating merchants. In turn, merchants can use the digital tokens to pay participating suppliers or pay their local taxes.

The Marcos Paz scheme is one of several of Koibanx's financial product initiatives in Latin America, and it illustrates the scope of the distributed ledger technology.

ALSO READ: Blockchain: What it is and how it works

“Blockchain is a technology that can be applied in various industries,” Koibanx co-founder Leo Elduayen (pictured) told BNamericas. “Many people mistakenly believe that blockchain itself is an industry, when in reality blockchain is a way to do things in a different manner.”

Elduayen, who co-founded Koibanx in 2014 to build new financial infrastructure for the government and private sectors, cited the tokenization of commodities as an example.

“Any commodity, such as oil or even energy could be represented, via digital assets – or tokens as they are known ” he said.

Transfers, payments, tendering processes could be registered on a blockchain for greater transparency, he added.

Indeed, a key promise of blockchain is reducing costs by “removing intermediaries or the administrative effort of record keeping and transaction reconciliation,” according to a report from professional services firm McKinsey.

Today, the solutions have payments features, with plans to eventually use the wallets to offer associated value-added services and products, such as microinsurance in the case of Río Uruguay.

Overall in Latin America, blockchain is still in the early phases of development, but both the public and private sectors are entering the arena. In Chile, for example, Santiago stock exchange launched the world's first blockchain system for securities trading while the national energy commission uses blockchain for the certification of data on its Energía Abierta portal.

Elduayen said the Koibanx platform illustrates the presence of blockchain financial products in Latin America. He said, “at Koibanx, while things are still at an early stage, today we have processed around US$500,000 in transactional volume. If you compare that to the traditional financial system, we’re obviously still a drop in the ocean. But we’re talking about volume higher than that associated with the test of concept phase, and it is ramping up.”

Regarding blockchain readiness in Latin America, he said the region’s financial services sector was “fertile ground,” citing the potential of mobile banking among the underbanked and the variety of associated apps and services that can be developed.

Elduayen also mentioned growth plans as Koibanx, in partnership with one of the firm’s investors, fintech promotion company Finnovista, is launching operations in Mexico, where the company targets growth in the banking sector and the wider financial services industry.

In addition to Argentina and Colombia, Koibanx has a presence in Uruguay.

Achieved Third Quarter 2022 Average Production of Approximately 30,391 BOPD, Up 5% from One Year Ago

The subsidiary of state-run company Ecopetrol said it encountered gas while drilling its Coralino-1 well on the VIM-8 block.

Ecopetrol disburses financing line for USD 1,200 million for advance payment of credit contracted for the acquisiti...

Want to read more information about Flying the blockchain flag in Latin America?