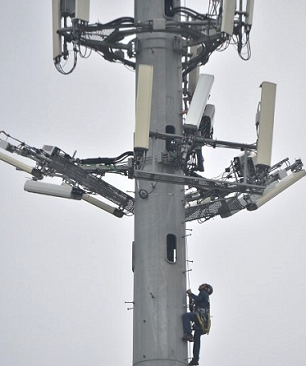 The more than 4,000 applications for mobile antenna permits currently awaiting approval by Brazilian municipalities represent about 2bn reais (US$375mn) in investments by the telecommunications sector.

This is the estimate made by SindiTelebrasil, the association that represents Brazilian private operators, according to which the country reached in May 100,000 cellular antennas in operation. But this number is still insufficient to meet the growing demand for connectivity in the country.

The milestone represents a 6% growth over May 2019, or 5,612 new antennas added throughout this period. Meanwhile, around 33 new 4G lines are activated every minute in the country, according to SindiTelebrasil.

If the more than 4,000 requests had been approved, the pace of expansion would be practically double, the operators said.

According to telecommunications infrastructure association Abrintel, ideally each antenna should serve up to 1,500 customers. In Brazil, this proportion is 2,300, while in China, Huawei’s global director of cybersecurity governance, Marcelo Motta, said the rate would be 400.

According to SindiTelebrasil, there are more than 300 pieces of municipal legislation on cellular antennas in the country, and many of them hinder and often prevent the installation of infrastructure. In some cities, licensing takes up to two years, operators said.

Carriers have long asked for the implementation of fast-track licensing based on the principle of positive silence, according to which a permit is granted if municipalities fail to respond to a request within 60 days.

Even after the approval of the Antenna Law at federal level in 2015, which aimed to unify rules and speed up municipal licensing processes, many cities have not yet incorporated the rules.

Among those that have streamlined licensing are Rio Grande do Sul capital Porto Alegre, where the process can be done digitally, SindiTelebrasil said.

Of all antennas installed in the 12 months to May, the biggest advance was made in 4G technology, with the installation of networks in 477 new municipalities.

According to the private carriers, 4G is now present in 4,950 municipalities, where 97.3% of the  population live.

And 17.3mn new 4G lines were activated in the period, up 12% year-over-year. Altogether, 157mn 4G lines are in operation in the country.

The plans suggest the new government will continue the highway concessions agenda.