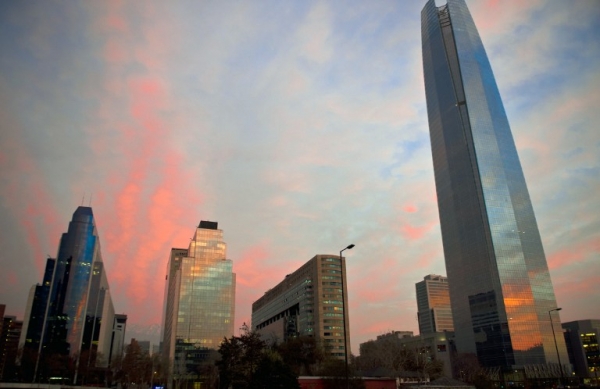 The Chilean economy grew at the slowest pace since 2009 in the third quarter.

GDP expansion was 0.8% from a year earlier, compared to 1.9% in the second quarter and 2.7% in the first, according to figures from the central bank .

The sluggish economy grew a seasonally adjusted 0.4% quarter-on-quarter (q-o-q), after having contracted 0.1% in 2Q and expanded 0.7% in 1Q.

Third quarter performance was broadly in line with the market consensus forecasts of 0.9% y-o-y and 0.3% q-o-q.

Investment was the biggest drag on growth in the third quarter, down 9.9% year-on-year and 0.7% compared to the previous quarter.

Exports saw a 1% increase compared to 3Q13 and the second quarter of the year, while imports dropped 7.2% and 1.9% in the same comparison.

Chile's pace of growth is likely to accelerate slightly in the coming quarters due to government stimulus measures and the lagged effects of key interest rate cuts, said London-based Capital Economics.

The key rate is currently at 3% and most analysts expect it to remain intact during the rest of the year. Both Capital Economics and local investment firm EuroAmerica, however, see fresh rate cuts as possible next year, as part of efforts to revive a weak economy.

Chile's GDP expanded 4.1% last year, and EuroAmerica forecasts it to slow to around 1.7% this year. Capital Economics expects a weak recovery for next year, with annual growth rate up 3% in 2015.

Chile and other commodity exporting countries in Latin America are currently facing a more adverse global environment than during the past few years – with a slower-growing China, lower commodity prices and higher international financing costs.

David Bravo – who headed a commission formed by then-president Michelle Bachelet to analyze the system and propose changes – said the move would “d...

The company said in a press release that it launched healthcare, cyber and D&O cover in Chile and Colombia.

ElegirSeguro.com is recognized as among the 100 most innovative insurtechs in the world

Other companies in: Insurance (Chile)

Why Brazil's Aegea could go for more sanitation concessions

Want to read more information about Chile economy grows at slowest pace since 2009?