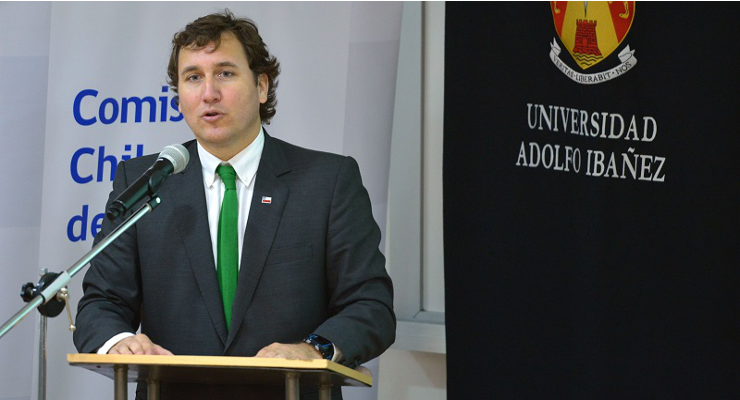 The Chilean Commission of the Cobre (Cochilco) presented today, in the Faculty of Engineering and Sciences of the Adolfo Ibáñez University, the main results of the studies elaborated by the Institution: Projection of Water Consumption and Electric Power of the Great Copper Mining 2018 -2029.

The activity was inaugurated by the Undersecretary of Mining, Pablo Terrazas; Deputy Executive Vice President of Cochilco, Manuel José Fernández; and the Dean of the Faculty of Engineering and Sciences of the Adolfo Ibáñez University, Alejandro Jadresic.

"The future requirements of water and energy, by the mining industry, will be able to test our creativity in regard to the responsible use of resources, among other things, to respond to these present and future challenges, as government we are working through a multisectorial table to promote the efficient use of our territory, promoting the use of shared infrastructure in, for example, ports and desalination plants, "emphasized the Undersecretary.

For his part, Cochilco's deputy executive vice president, Manuel José Fernández, said that one of the main challenges for mining companies is to ensure the sustainable supply of water and energy, and that these studies carried out by the Institution contribute to this objective. "Cochilco plays a key role in mining since through its studies it allows us to further enhance the importance of this activity in the country," he said.

The Dean of the Faculty of Engineering and Sciences of the Adolfo Ibáñez University, Alejandro Jadresic, pointed out that water and energy are critical inputs for mining and that the Faculty is addressing these issues that are complex for the sector.

Consumption of water and electricity

The analyst of Cochilco, Camila Montes, presented the results of the study "Projection of Water Consumption in the Copper Mining 2018-2029". He noted that a sustained increase in seawater consumption is expected in the operations of the large copper mining industry in the next decade. "It is projected that the consumption of seawater will be increasing, reaching 10.82 cubic meters per second by 2029, which represents an increase of 230% compared to the expected value for 2018. With this, 43% of the Total water required in the copper mining industry will come from seawater, as more and more mining companies are joining the construction of their own desalination plants or direct seawater to face the shortage of this resource, "said the expert. .

He added that this increase is strongly driven by the Antofagasta region, particularly between 2019 and 2024, a period in which the start-up or expansion of several desalination plants is expected, such as those of Escondida EWS, Desalination Plant North District of Codelco, the expansion of pipes for the Sentinel District of Antofagasta Minerals, the use of seawater for the expansion of Sierra Gorda by KGHM, and the progressive start-up of the Dominga iron project starting in 2020.

"Mining is already an intensive energy consumer in Chile and projections estimate that the demand for electric power will increase 41% in the next 11 years," Brantes said.

He added that the expected electricity consumption would grow from 22.6 TWh to 31.9 TWh between 2018-2029 and that to satisfy the expected demand of copper mining it would be necessary to add an electric generation capacity of 1,336 MW in the period 2018 - 2029 .

At the end of the presentations, a report analysis panel was developed by the Director of the Civil Engineering degree in Energy and Environment of the Adolfo Ibáñez University, Carlos silva; the Corporate Manager of Energy and Water Resources of Codelco, Francisco Danitz; and the Director of Studies and Public Policies of Cochilco, Jorge Cantallopts.

This Cochilco release was published using an automatic translation system.

A roundup of electric power sector news from Argentina, Chile and Uruguay.