Chile's Cau Cau bridge may have to be demolished 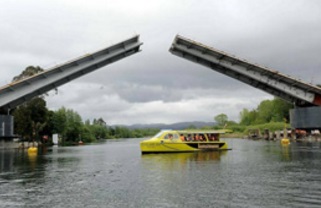 Chile's first drawbridge may have to be demolished even before it can start being used, local newspaper El Mercurio reported.

The Cau Cau bridge in the southern city of Valdivia was been a sore point for Chile and Spanish builder Azvi, which botched the works on several fronts, most notably installing one of the bridge's traffic decks upside down. Chile's oversight of the works has also been criticized.

US engineering company Hardesty & Hanover along with Chilean firm VMB began last year an evaluation of the troubled project.

The study shows that poor installation has compromised the structural composition of the deck, which means it must either be repaired or replaced, said public works minister Alberto Undurraga.

Repair works are the more risky option, while demolishing and replacing the bridge would cost US$10-14mn, the daily said.

The ministry has said that the repaired bridge could be completed in 2017.

Approvals also fell during the first three months of the year, both in terms of projects and investments.

BNamericas provides a roundup of briefs from Chile, Argentina and Paraguay.

Chile to submit EIS for US$450mn metro expansion in H2

Want to read more information about Chile's Cau Cau bridge may have to be demolished?