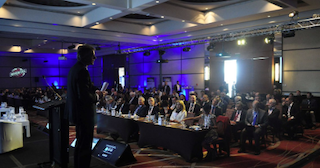 China’s current economic stimulus measures are positive for the nation’s economy and copper demand in the near term, said panelists Wednesday at the 19th CRU World Copper Conference in Santiago, but views differ on how the stimulus could impact copper demand growth next year and beyond.

Equivalent to about 4% of its GDP, China's 2018-19 stimulus package is significantly smaller than previous stimulus episodes in 2008-10 and 2015-16, and is far more driven by tax cuts than direct government spending, making it less impactful overall for the economy.

The stimulus has led to small increases in 2019 economic growth forecasts for China, and all the panelists’ forecasts were in line with China’s official target of 6-6.5%. However, factors such as the US-China trade war have impeded any increase to industrial production growth forecasts, which remain at around 5%, according to the panelists from Cochilco, CRU and JP Morgan.

The three analysts’ have nevertheless increased their Chinese copper demand growth forecasts for this year, ranging from 2.5% to 3.5%, with copper price forecasts ranging from US$2.77/lb to US$3.05/lb.

According to Natasha Kaneva, executive director, global commodities at JP Morgan, China’s decision to stimulate the economy was driven by the trade war with the Donald Trump administration and a need to fortify the economy to buffer against any impact.

But economic stimulus measures can have unintended consequences, and the most worrying in China’s case is rising debt levels. JP Morgan forecasts debt in China will reverse the downward move that occurred in 2018 to reach a record of 286% of GDP in 2019.

“We do believe the stimulus will come at a cost,” Kaneva told the conference, adding she believes a trade agreement between the US and China will be reached mid-2019. Cognizant of the rising debt levels, China is then likely to eliminate stimulus measures, and that will be negative for commodity markets, Kaneva said.

But Victor Garay, market coordinator for Chilean copper commission Cochilco, believes China’s current stimulus will serve mainly to avoid a hard landing in the country’s economic slowdown and in the long term will not have significant negative consequences.

Cochilco’s outlook is that demand growth will slow to 1.5-1.8%, or perhaps even lower, as the bigger force of China's economic transition away from fixed asset investment evolves, but that China’s large base copper demand means annual demand growth in terms of tonnage will continue to be significant at around 120,000t.

“So, the perspectives for world copper demand are positive,” Garay said.

The sector has come under heavy criticism from the López Obrador administration, but the hard data does not support the president's repeated attacks.