LONDON/HOUSTON/SINGAPORE, 1st April 2020 – If coronavirus containment measures continue to curtail movement of goods and people through Q2 this year, alongside an economic downturn, the market impact could trim Wood Mackenzie’s 2020 global energy storage deployments forecast by 19%.

This equates to a 3 GWh reduction over the year. Notably, this would still make 2020 a record-breaking year with 12.6 GWh deployed. 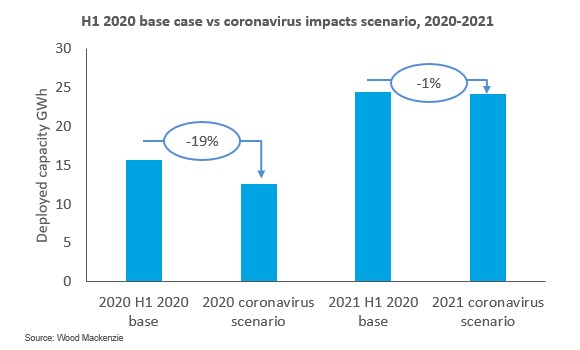 Le Xu, Wood Mackenzie Senior Research Analyst, said: “As this happened in China, Japanese and South Korean facilities ramped up to capitalise on the shortfall. As of March, restrictions have been lifted and production facilities in China are now at 60% to 70% of pre-virus levels.

“As such, the major risks to battery supply have been somewhat mitigated. A similar story has panned out for inverters where major supply risks have also, so far, been alleviated. However, mitigation efforts will likely see the battery supply chain accelerate. This will have far-reaching implications, not just for energy storage but for the global economy too.”

A recession for 2020 is looking imminent and outside of installation restrictions there will be additional downward pressure on demand as consumers spend less on luxury high-cost items, such as residential energy storage.

“For large scale projects, particularly in markets where energy storage is predominantly a merchant play, financiers’ appetite for this type of asset is already being reduced. Final project investment decisions will be pushed further out to when market conditions make the risk-return-ratio for this asset class more palatable.

“On the other hand, interest rates are being slashed to record low levels. This may be a silver lining for financially borderline projects, with lower costs of capital available to help to tip them into the investable category. This will be of particular interest to merchant projects currently seeking finance that typically rely on high-cost equity capital” said Rory McCarthy, Wood Mackenzie Principal Analyst.

The global energy storage market contracted for the first time last year, falling from 6.2 GWh in 2018 to 5.3 GWh in 2019. This contraction was primarily due to market declines in South Korea, China, the UK and Canada, according to Wood Mackenzie’s analysis.

Despite slow downs in key markets and this year’s coronavirus crisis, the industry should return to growth in 2020.

"It did not take long before cracks appeared in South Korea’s unbelievable 2018 market growth. Since breaking the market record for most storage deployed in a single year, 28 fire incidents were reported, pulling this bull market into a 70% year-over-year decline. 2019 saw over 1 GWh in annual deployment reductions - enough to put a generally slow year into the red in growth terms.

“The reality of the risk involved in energy storage revenue streams, and the general lack of revenue options, hit deployments in China, the UK and Canada. One of China’s largest players exited the market and the Xinjiang government cancelled around 400MWh of projects post-procurement," said Xu.

McCarthy added: "The UK was slowed by a saturated frequency market and a behind-the-meter business case still in disarray as the regulator resets the country’s demand charge regime. The Canadian market is dominated by Ontario’s Global Adjustment charge, a relatively small market, so participants have exited this market or reduced deployment ambitions."

Looking ahead to the next five years, the global energy storage industry is set to thrive due to opportunities presented by the energy transition. Wood Mackenzie expects the global market to grow 13-fold to 230 GWh by 2025. Additionally, the total energy storage investment pot is projected to increase from $18 billion in 2019 to $100 billion by 2025.

“The energy storage market is anything but predictable. As it continues to mature, more credible pipelines are developing.

“China, Australia and the US all have grand ambitions to deploy gigawatts’ worth of energy storage each year out to 2025. We expect these to be the key global growth markets over the outlook period.

“The US will begin pushing ahead of the pack as utilities’ procurement of storage, particularly solar-plus-storage under the near-term Investment Tax Credit window, drives the lion’s share of deployments. Additionally, behind-the-meter (BTM) deployments will continue to surge in the incentive-heavy US.

“We also see growth returning to other key global markets, and taking off in other nascent markets, although deployment volumes will be overshadowed by the three leaders,” said McCarthy.

Looking ahead, one trend to keep an eye on post-2020 is hybrid energy storage.

As noted in Wood Mackenzie’s analysis, one-third of all storage deployed in 2019 was part of a hybrid system. Although deployments of wind-paired projects were negligible in 2018, they tied with solar in 2019

McCarthy added: “In 2018 and 2019, we began to see a more commercially viable hybrid storage market take off.

“Solar-paired storage was the clear winner in 2018, with 582 MWh deployed against wind-paired at 57 MWh. However, in 2019, these two technologies were deployed in equal amounts (227 MWh).

“We expect solar-paired storage to take over in the coming years, as decision-makers overseeing policy and procurement processes come to regard it as a lower-cost option versus wind-paired storage.”

The deal is part of a broader move by Zuma's owner, China's State Power Investment Corporation (SPIC), to grow in Mexico and Latin America.

The plan, which involves building five large solar parks in the northern state and transmission lines connecting with the United States, is in the ...

Want to read more information about Coronavirus could derail energy storage growth in 2020?