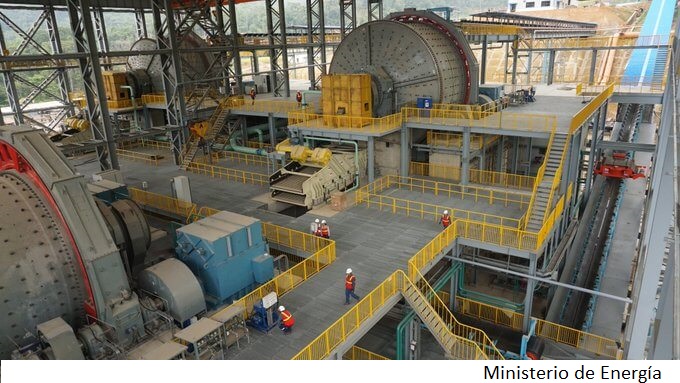 Mining companies in Ecuador are preparing to resume activities following the issuing of a biosecurity protocol by the energy and non-renewable natural resources ministry.

The protocol for the transport of materials and the return of workers to mines has been approved by the emergency operations committee and, according to the ministry, the reactivation of mining operations in all phases is expected this month. As of May 15, 60% of operations were halted nationwide because of the coronavirus crisis.

Deputy mines minister Fernando Benalcázar told BNamericas that mining would begin to restart in the last week of May and the first week of June, when the progressive reinstatement of personnel will start.

The official expectation is that around 33,000 direct jobs and 100,000 indirect jobs will be gradually restored.

On March 16, when Ecuador went into quarantine to hinder the spread of COVID-19, large mining companies reduced their activity to a minimum, while small-scale mining ground to an almost total halt.

Mirador and Fruta del Norte are the only large-scale mining operations in the country. The US$1.4bn Mirador copper mine is held by EcuaCorriente, a subsidiary of Chinese consortium CRC-Tongling Nonferrous Metals, while Fruta del Norte is an underground gold operation in which Canada’s Lundin Gold invested US$692mn.

Benalcázar said that on May 16, gold concentrate began to be transported from Fruta del Norte to the port of Guayaquil. Another 21 containers were due to arrive on Tuesday night and another nine next week, to export 600t of gold to Finland.

Meanwhile, EcuaCorriente is adjusting its internal guidelines to the national protocol. In a meeting that Benalcázar was expected to hold Tuesday night with EcuaCorriente executives, the date for restarting copper exports was due to be established.

The protocol for the mining sector involves a series of administrative steps that the operations, logistics, human resources and medical departments of each company have to follow to ensure that those who enter the mine are not carriers of the virus and are in healthy conditions to resume work.

The protocol contains general provisions and minimum requirements that mining owners, contractors and suppliers must adopt to take care of the health of their workers, communities near projects and mines, and towns near the transportation routes of minerals and inputs.

Coordination in the workers' shift changes will be vital, since instead of the 14-day on, seven-day off schedule, the rotation of workers is expected to decrease and could be similar to that in force since start of the pandemic for the oil sector, that is 28 days of field work followed by 28 days of rest.

In the case of foreign personnel, the return to work could start in June, when airports are re-opened.

President Lenín Moreno issued a decree establishing the logistics corridors for strategic sectors, which in the case of mining involve the transport of minerals and the necessary supplies. The decree also establishes legal sanctions for those who try to stop mining.

Benalcázar recently predicted that this year personnel in mining projects could average between 75% and 80% of the normal level, depending on the behavior of the pandemic, but by 2021 all personnel will be on the ground.

Companies such as Anglo American, Codelco, BHP, Grupo México, Lumina Gold, INV Metals and SolGold are involved in exploration projects in the country.

The projects are the La Plata mine (polymetallic); Curipamba (copper and gold); Loma Larga (gold and silver); Mirador Norte (copper), part of the M...

Atico on track for environmental license for Ecuadoran polymetallic project