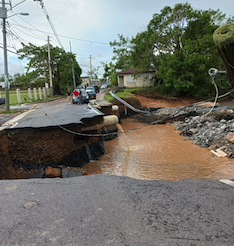 According to latest information by the Department of Transportation and Public Works, 66 highways and roads were closed due to landslides, fallen trees or transmission lines and flooding.

Heavy rains hit the island last weekend, overburdening the sewage and water supply systems. Collapsed pipes interrupted water services for 60% of customers, but regular service had returned for 59% by Wednesday afternoon, according to the aqueducts and sewage authority.

“We continue with the recovery efforts of our water inlets and reservoirs that were flooded due to strong water currents. We also carry out cleaning of accesses to dams and to some of our water plants,” the head of the authority, Doriel Pagan, told a press conference.

Governor Pedro Pierluisi said during a press conference that Luma's contract would remain in place, despite criticism due to poor performance. Pressure on the company is mounting as outages continue and customers still remember the months-long power cuts after hurricane Maria in 2017.

Awarding the company the contract generated heavy resistance, especially from unions, while others acknowledged that Luma took on a difficult task by taking over a dysfunctional power system.

Officials also filed a claim with the federal government to declare a national disaster and become eligible for funds from the federal emergency management agency (FEMA).

The Mexican company could use federal US funding to launch its first 5G network in Latin America.

Puerto Rico speeds up reconstruction with US funds

According to a recent announcement, US emergency management agency FEMA has obligated US$30.4mn for reconstruction projects for late May/early June.

Other projects in: Infrastructure (Puerto Rico)

Other companies in: Infrastructure (Puerto Rico)