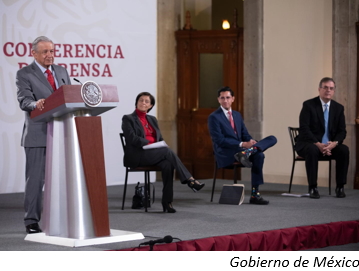 Mexico and the US agreed to end the 2015-20 water delivery cycle, part of a 75-year-old bilateral water treaty, without debt.

Even with this extraction, the government will still have 87Mm3 of water available to supply 13 border cities in the next three months, Blanca Jiménez (pictured, second left), director of water authority Conagua, said at President Andrés Manuel López Obrador’s (AMLO) morning press conference on Thursday.

The move helps Mexico complete its side of the delivery agreement, which also included a 432Mm3 delayed delivery that was postponed during the current cycle, and secure the population’s access to clean water, AMLO said at the conference.

Officials said the US committed to supplying Mexico with water in case of drought and/or a lack of water for human consumption.

The Mexican government avoided a sanction and a possible bilateral conflict.

“We had some difficulties in complying with the treaty, however, [the US government] understood the special circumstance of the delivery of water, especially due to the conflict in Chihuahua state,” he said, referring to farmers who for months have preventedwater extraction from La Boquilla dam.

Chihuahua must contribute nearly 1.17Bm3 of water, 54% of the overall goal, to the US to meet the objective every five years, according to Conagua.

On September 12, Conagua reported that Mexico had delivered 1.78Bm3, of which Chihuahua had contributed 44%.

“I would like to remind you what the treaty is. It is a very beneficial treaty for the country [Mexico] because our country receives four times more than what it contributes on an annual basis. We received 1.85Bm3 and contributed 432Mm3,” Conagua director Blanca Jiménez said at the conference.

Proagua is a key program to subsidize water infrastructure and should receive US$94.6mn in 2021, the lowest amount in five years.

Information from Conagua and CILA on compliance with the 1944 Treaty, based on technical and scientific elements

The only data that have been systematically erroneous and do not reflect reality are those presented by the Government of Chihuahua.

The state of play in Latin America’s green bond market

Where is ESG heading in Latin America?

Bolivia promotes a plan for the generation of green hydrogen towards the ener...

Aña Cua: In March they plan the first laying of concrete for the future Power...

Want to read more information about Mexico complies with US water delivery commitments?