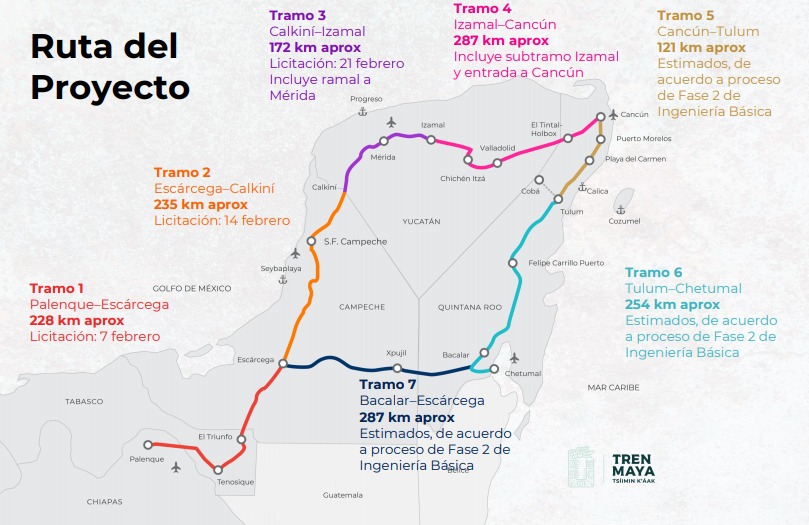 Mexico’s government will accelerate construction of the US$7.5bn Maya train line this year to compensate for delays in 2020 that were caused by the COVID-19 pandemic and adverse climate conditions.

The plan is to double or triple work shifts at the first four stretches that have been awarded, according to a video report from tourism board Fonatur that was shown on Monday at President Andrés Manuel López Obrador’s daily press conference.

The government started showing video progress reports for the Maya train in August last year, but details about delays had not been disclosed until now.

“To intensify the terrain works we [Fonatur] will use more machinery and hire qualified personnel for its operation … Regarding drainage works, we are working with prefabricated elements to optimize execution times,” it said.

The government has however not addressed the definite suspension of construction works at stretch four that a district court in Campeche state reportedly granted in December to a group of more than 100 environmental and indigenous organizations.

Construction on stretches one, two, three and four started during last year’s second quarter, following highly competitive bidding for the first three and the decision to award the fourth stretch directly to ICA Infraestructura.

The four awarded stretches make up around 922km of the passenger and freight rail line’s total extension of 1,500km.

The tender for stretch five, which was split into two sections, has been launched and Fonatur plans to award the contract this month.

Stretches six and seven will be built by the armed forces in 2022 after they complete construction of the Felipe Ángeles international airport (AIFA) in Mexico state.

AMLO has said that the entire Maya train project, which crosses five southeastern states, will be completed by 2023.

The projects represent around US$1.5bn in foreign investments, with most of them being concentrated in Querétaro's state capital.

Time's running out for Mexico City to implement a water plan

Spotlight: 3 suburban train projects for the Valley of Mexico

Bolivia promotes a plan for the generation of green hydrogen towards the ener...

Aña Cua: In March they plan the first laying of concrete for the future Power...

Want to read more information about Mexico to speed up Maya train construction?