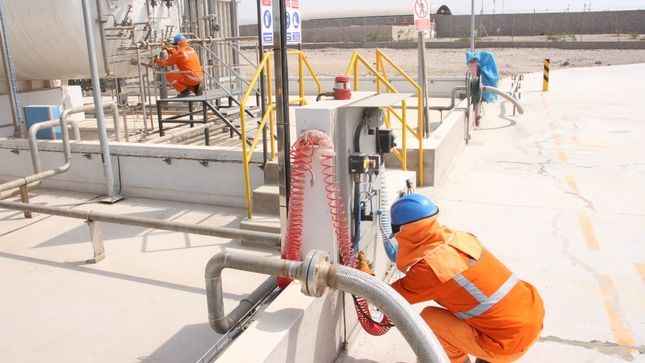 The Minister of Energy and Mines, Alessandra G.H Herrera Jara, led a working meeting in which alternatives were evaluated to grant orders to State electricity companies and develop projects for the massification of natural gas in the Cusco, Ayacucho, Junín, Huancavelica and Ucayali.

In the meeting, the head of the Ministry of Energy and Mines (MINEM) ratified that the implementation of the natural gas service for homes, transportation and commercial activities at the national level is a priority in the government, and for this reason the articulated work will allow progress to be made in benefit of thousands of families.

"The articulated work will allow us to achieve the common objective, which is the massification of natural gas, which will contribute to the development of the country and for the government it is an A1 priority. MINEM offers all its availability, we have all the possibilities to develop the projects and we can't keep waiting, we have to find solutions," he declared.

At the meeting, the executive director of the National Fund for the Financing of State Business Activity (FONAFE), Lorena Masías, supported the legal framework under which orders granted to State companies are governed, as well as the procedure to follow for implement massification projects via agreement with electricity distributors.

Among the attendees was the regional governor of Ayacucho, Carlos Rúa Carbajal, and the Vice Minister of Hydrocarbons of MINEM, Martín Dávila Pérez, before whom the report of the Distriluz Group was presented on the evaluations regarding the massification of natural gas in Junín, Ayacucho and Huancavelica.

Vice Minister Dávila announced that the possible participation of the companies Electro Sur Este for the massification of natural gas in the Cusco region, and Electro Ucayali in the Ucayali region, is also being coordinated, which would allow families in the central, southern and eastern regions of Peru have access to energy at a lower cost that contributes to improving their quality of life.

Mandatory compliance directive in the company was approved by the Board of Directors and published in the official newspaper El Peruano.

Procurement is underway related to virtual reality, digital standards and ethical hacking, among other tenders.

MINEM: Regular and premium gasoline will be marketed from 2023

Petroperú maintains optimal and sustained production in Block I of Talara

Peru: MINEM visited 52 native communities in Lot 8 of Loreto for the second stage of the Prior Consultation process