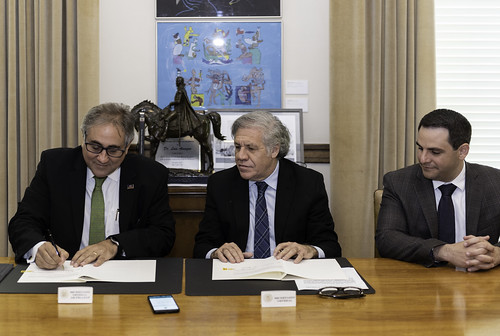 The Organization of American States (OAS) and Latin American banking federation Felaban have signed a cooperation agreement for capacity development on cybersecurity in the region.

Felaban and OAS have stepped up efforts to foment cybersecurity in the region, with the OAS actively working in countries like Mexico to develop comprehensive strategies to attack the problem.

At a ceremony (in photo) held at the OAS headquarters in Washington DC on Monday, Felaban general secretary Giorgio Trettenero said the agreement "will allow us to unite efforts in a topic of high impact and importance for the banking of the region such as cybersecurity."

According to OAS, 37% of all banks in Latin America and the Caribbean were subject to successful cyberattacks in 2017, costing the sector an estimated US$800mn.

Hailing the new agreement, OAS Secretary General, Luis Almagro, stressed that it is essential to engage in partnerships with the private sector, particularly the financial sector, in the development of cybersecurity capabilities in the region.

"Felaban is a leading ally in the formulation of cybersecurity policies as a promoter of understanding among the different financial entities of the region, as it contributes to the unification of banking practices at the service of citizens, especially those with fewer resources," said Almagro.

The region faced several costly attacks on banking systems in 2018, including serious breaches in Mexico and Chile that spawned redoubled regulatory and legislative efforts to fortify defenses in their financial sectors.

Chilean banks experienced a wakeup call of their own in May 2018 when hackers stole US$10mn from one of the country's largest lenders, Banco de Chile, prompting authorities to order banks to boost cybersecurity.

The growing risk comes as spending on cybersecurity is booming.

Industry analysis firm Canalys estimates that global cybersecurity technology spending reached US$37bn in 2018, up 9.1% from 2017, with the growth rate in Latin America being 9.2%.

América Móvil announces it will submit for the approval of its shareholders a proposal to unify the series of shares currently representing its cap...